A Baran lab cycle of discovery: hydromethylation of unactivated olefins

If the Baran lab cycle of discovery was a baseball field, total synthesis is like the home plate where much of the action takes place. Just like a baseball player trying to score a run, a graduate student who joins the lab has to go through the first base of making a natural product, the second base of designing new strategies, the third base of finding new methodologies and back to home plate to complete the discovery cycle. 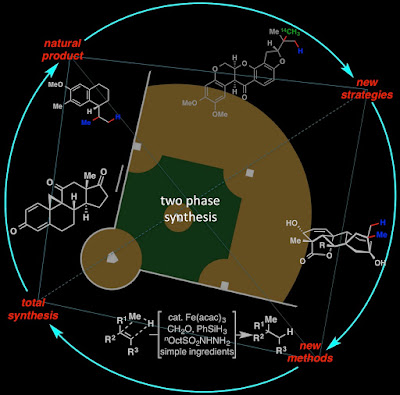 In my last project, I barely made it to the first base with the synthesis of some steroid skeletons. When I was about to continue “the cycle” with some ideas for a further development, Phil told me not to, and convinced me to start a seemingly non-related project, a method for an overall addition of a methane molecule to unactivated olefins.

How did we start?


During the preparation for the manuscript of the last project, I went to Phil to get his opinion on how to describe the figure (below) more convincingly. 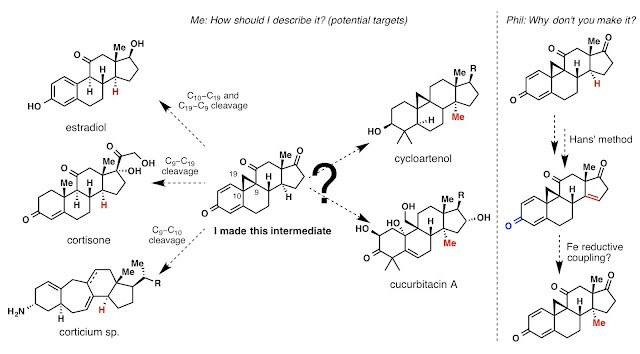 Me: Since I did not make the methyl in the C,D-ring junction, how should I describe it?
Phil: (Looks at the figure in 3 seconds)…why don’t you make it.
Me: uhh???(Thinking about his “irrelevant suggestion”!!! Com’on Phil!I just want to PUBLISH it).
Phil: You can make an olefin in the D ring using Hans’ method, and add a methyl group to it…maybe useing our reductive iron coupling.
Thinking about Phil’s suggestion more carefully, I actually liked it because it would fulfill my dream of making five different classes of steroids from the same intermediate, thus completing the idea of making a “steroid pyramid” using the idea of two-phase synthesis. So I decided to give it a try.  I quickly observed some C-C bond formation with N,N-diphenylhydrazones and O-benzyloximes while trying to wrap up the previous project. 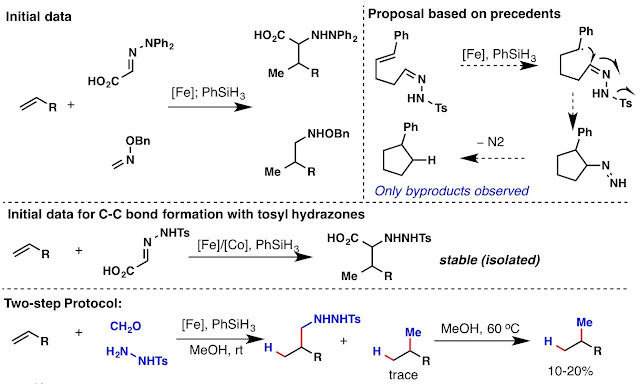 Quentin made the first tosyl hydrazone in the lab based on studies reported by Kim and coworkers. However, after two weeks of investigation, we only got some undesired rearrangements but not C-C bond forming product. Based on the previous result with other hydrazones and oximes, I had a strong belief that the C-C bond between the olefin and tosyl hydrazones should also work. In addition, a quick search showed the feasibility of reductive C-N bond cleavage under basic conditions. Putting these things together, a two-step sequence could be envisioned. It took me a few days to prove that the C-C bond formation with a tosyl hydrazone was indeed feasible; however it took me more than a month to achieve the first C-C bond adduct with formaldehyde tosyl hydrazone, The rate-determining steps in this process were finding the conditions for in situ formation of the hydrazone and determination and suppression of the byproducts. Importantly, the C-N bond cleavage was also obtained just by heating the reaction mixture after C-C bond formation to 60 oC in methanol. Chao then joined the project, and in only a week he quickly modified conditions to a standard two-portion conditions to solve some reproducibility issues as well as improve the yield.
During a discussion, Phil mentioned that we should call our methodology “a molecular editing method”. So two criteria for substrate scope were to have substrates with a “real name” and substrates with complexity. The good thing about the formal criterion is the diversity of the repertoire of commercially available compounds, as we basically just went through Sigma-Aldrich and TCI catalogs and ordered substrates with olefins. Commercially available terpenes such as carvone oxide, limonene oxide, dihydrocarvone, carene, rose oxide, dihydromyrcenol… all worked under our conditions but we could not separate the desired hydromethylated product from the hydrogenated byproduct; this problem is by far the biggest issue of the current work 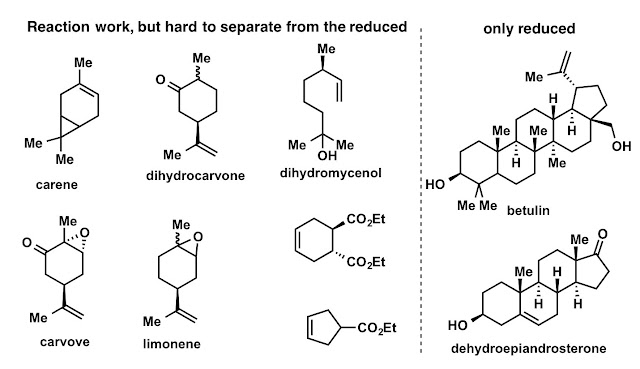 While most of the work was completed at TSRI, in the other side of the country, Brad Maxwell at BMS tried to apply our method in radiochemistry. I told Brad that it would be my dream if he could make it because I don’t think I will have a future occasion to have radioactivity data in a publication that I co-author, and he did it amazingly with a complex terpene called rotenone using a very low concentration (ca. 1.5%) of [14C]formaldehyde. Here is what Brad taught us about the origin of 14C:

“Typically, 14C is not naturally in enriched form since it is not abundant enough to make the process feasible. Instead, 14C is produced by irradiating solid beryllium, aluminum nitride or saturated ammonium nitrate solution with neutrons for 1–3 years in a 14N (n,p)14C reaction within a nuclear reactor. Longer irradiation times produce higher specific activity of 14C. In the process, the 14N is converted to 14C. After the irradiation, the material is dissolved in H2SO4 and the effluent gases are oxidized by an appropriate catalyst.  The resulting  [14C]CO2(g) is then passed through NaOH(aq) and it is eventually precipitated as Ba[14C]CO3 from which all 14C-labeled products are prepared. The only current producers of 14C are located in Russia.”
Looking back on what we had made in term of (radio)labeled compounds with the current method, Phil might be right when he said: “Since there is no other way to do this sort of methyl editing, even if it is a long reaction time and a complex reaction system, people still have to use it.”
Like a baseball player who undergoes the process of bating (hitting the ball/failing/trying to hit again), running to the next base, getting tagged out by the opponent and repeating the process again until scoring. Total synthesis requires a lot of trial and error, with a lot of time spent in going back and changing the strategy. In this project, the most important moment might be the lessons that we learnt during the previous synthesis (of steroid skeletons), gave us hints to the discovery of hydromethylation of olefins. Personally, I enjoyed my experience in the lab; however, one thing I still could not fully capture is how our “coach” makes his decisions. Most of the time just in the blink of an eye, and sometimes it just comes from nowhere…but it actually works (at least in my two projects).