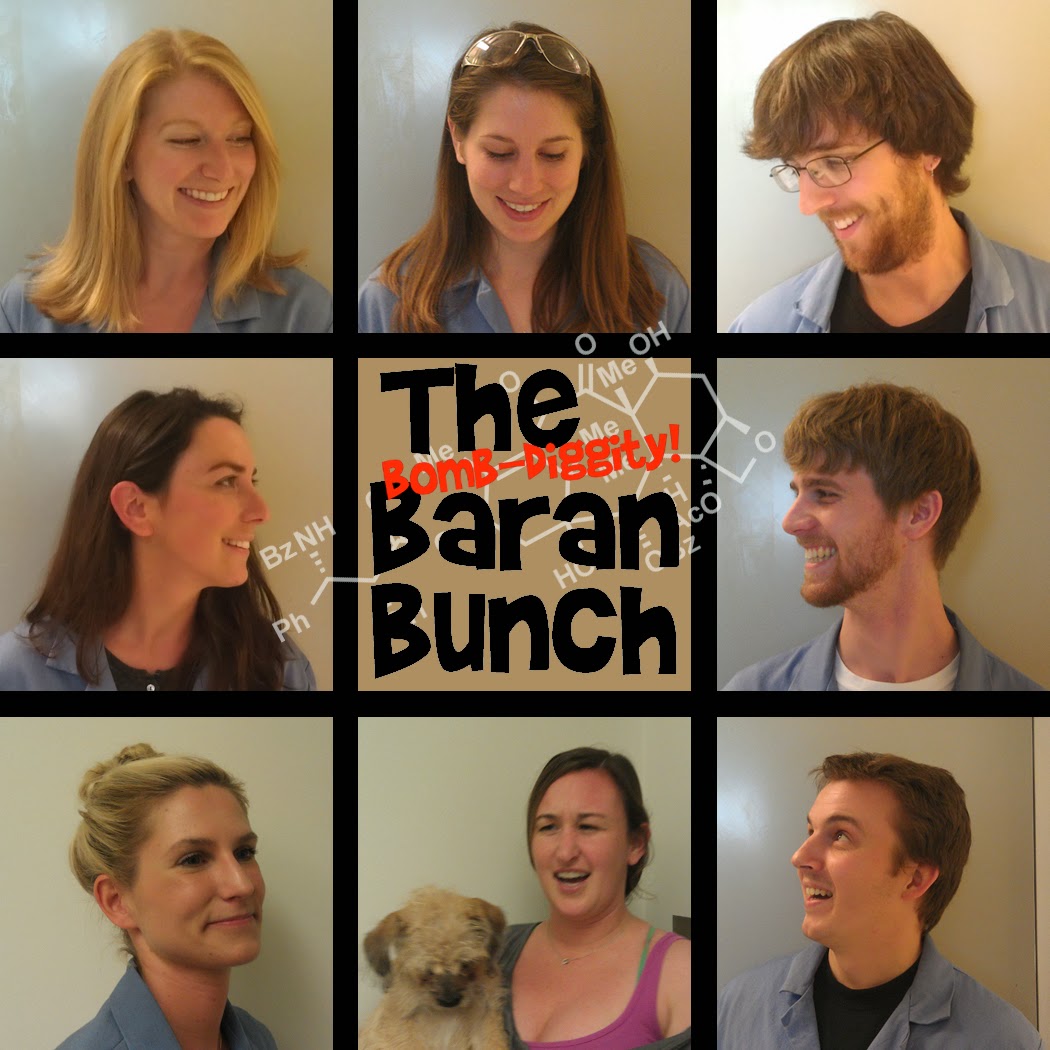 Well, it's that time of year again. You know, the one where I look out my window at the Torrey Pines Golf Course and the ocean, think about going to the zoo in a t-shirt and shorts, and then walk out to my car that is not stuck in the snow. But really, sometimes it's foggy, so don't feel too bad about the weather, Ohio!

This time of the year also happens to correspond with graduate student recruiting, when people who have not yet been to graduate school show up, well-coiffed and nervous, to learn just how dedicated graduate students are to free food. You can see our outstanding recruitment poster above. Using my powers of surviving graduate student recruitment (by the hair of my chinny chin chin), I will now bestow up you some advice, as well as all the great things about The Scripps Research Institute. Prepare for a long read...

TFDO aka methyl(trifluoromethyl)dioxirane is a very powerful reagent for the C–H oxidation of unactivated alkanes. Unfortunately, it is not commercially available and consequently needs to be prepared. Due to the volatility of TFDO, its preparation is sometimes seen as tedious if not finicky, but with the correct set-up and directions, we make TFDO without fail! It’s actually a sort of rite of passage for people working on C–H oxidation in the lab!

Methyl(trifluoromethyl)dioxirane (TFDO): A 500-mL, three-necked, round-bottomed flask was equipped with a large stir bar and a condenser that was attached to a 25 or 50-mL receiving flask, cooled at -78 °C (acetone bath with dry ice). A hose connector must exist between the condenser and the flask to allow for pressure release/condensation (see picture 1). 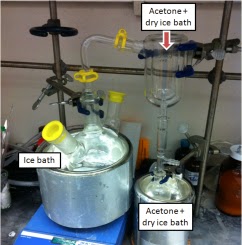 The cooled (ice-water bath) three-necked flask was charged with a slurry of NaHCO3 (26.0 g) in water (26 mL), then solid Oxone® (48 g) was added to the vigorously stirred slurry of NaHCO3 (see Note below, addition takes place over 1–2 min). A lot of CO2 gas evolves during this process (see picture 2). 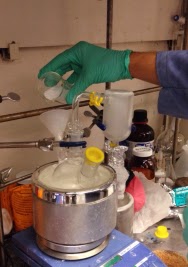 After 2 min, the pre-cooled (-20 °C, freezer temperature) liquid addition funnel was placed on the three-necked flask and was quickly charged with trifluoroacetone (24.0 mL). Then, the trifluoroacetone was added within ca. 10 s. After a few seconds, the pale yellow solution of the methyl(trifluoromethyl)dioxirane (TFDO) in trifluoroacetone was collected in the cooled (-78 °C) receiving flask (see pictures 3 and 4). 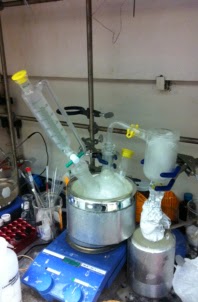 After 20 min, the receiving flask was tightly closed with a plastic stopper (yellow cap). The TFDO yield was 2.0 ± 0.5% (relative to trifluoroacetone) and its concentration was determined iodometrically (0.5 mL H20, 1.5 mL glacial acetic acid, 0.25 mL saturated KI solution; addition of 0.100 mL of the TFDO solution at –78 °C; titration with a freshly standardized 0.05 N Na2S203 solution). The concentration of TFDO in trifluoroacetone ranged typically from 0.4 to 0.6 M and the volume from 4 to 7 mL. Then, the receiving flask was wrapped with aluminum foil to protect the TFDO from light and stored at –80 °C (this reagent can be stored for several months without a drop in concentration). 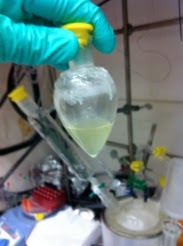 Over at BRSMblog theres a good post on the best synthesis ever. Its a discussion I've had around Baran Lab before, and I figured since total synthesis is our jam, people might have something to contribute to his comment section. I already gave him my 3 cents off the top of my head (Heathcock’s daphniphylline work, Corey-Altom synthesis of aspidophytine (this is probably my favorite), Overman’s work on actinophyllic acid). I'm sure I could think of a few others, but I need to run a column.

Happy Tuesday!
Posted by Dane at 12:59 PM No comments:

A Tale of Two Olefins

Today marks the day that another paper makes its way out of the hot little presses of the ACS Publication Office and into the world of chemistry. This time, it's a paper from our lab that details a reductive coupling of an election-neutral olefin with an electron-deficient one. Since the chemistry is already described in the article, I wanted give an account of how this project came to be.

Apparently Phil's gotten at lot of flak regarding the two-phase approach to terpene total synthesis. To be frank, the oxidase phases of our projects get significantly more attention by the general synthetic community than the accompanying cyclase phases. Some of the people in our lab even choose to replace the cyclase phase with a "purchase" phase so they can get right into the meat of the oxidase phase. In my first months here, I was talking to Emily (my hoodmate) and she said something to the effect of "no matter how you look at it, C–H oxidations are sexy."

Meanwhile, some would argue that the cyclase phases of our projects are simply comprised of Robinson annulations, conjugate additions, Diels-Alder cycloadditions, polyene cyclizations, ect.—"tried and true" reactions that your eye quickly passes over as you look for the unusual transformations in the synthesis. It would be pretty cool if we could breathe some extra pizazz into our cyclase phases and make them just as exciting as our oxidase phases.

Phil outlined this all for me one day when I popped in his office to talk about new projects. At some point he sketched some structures that I've included above to help illustrate an idea he had to sexify our cyclase phases (I know there's a carbonyl and a methyl missing from the left- and rightmost structures, respectively, but I think we can forgive him). To the left is a cyclization of an enone that Snider was able to coax using EtAlCl₂ as a Lewis acid to give a bicyclo[4.3.0]nonane. The decalin to the right is a pretty recognizable motif in terpenes that Phil wanted to synthesize from the readily available starting material that Snider used. Like Snider's transformation, Phil wanted a single-step reaction where we wouldn't have to convert the olefins to other functional groups in order to achieve the cyclization.

I set out trying to achieve this transformation using conditions that were inspired by a paper from Boger's group and was later joined by Yuki-san (rock-star postdoc and basketball extraordinaire). We were able to extend the method to intermolecular couplings and the rest of the story is history, or rather, outlined in our paper. The end result is a reaction that's pretty easy to set up—it's literally a dump and stir reaction. I've even made a short video of it below for those who want a little extra convincing.

There's one last thing I wanted to mention involving the mechanism we proposed at the end of the paper. Although we outlined some mechanistic probes in the text of the paper, there were a couple of others that we did not include that appear to support the formation of radical intermediates. When the vinyl cyclopropane shown below was subjected to the reaction conditions, I was able to observe several products by GC/MS: starting material and another product with m/z = 144, four separate products with m/z = 146, and one product with m/z = 148. Some possible structures that fit these criteria are shown below. However, I was not able to isolate and individually characterize these products.

It also would have been nice to obtain an EPR spectrum of a mixture of Fe(acac)₃ and PhSiH₃ to see if we could observe an Fe(III) hydride, but Scripps unfortunately does not possess an EPR spectrometer.

Anyways, if anyone has questions about the project or any of the background behind it, I'd be more than happy to answer them!
Posted by Julian at 1:22 PM 27 comments:

Latest MacPro vs TSRI Trash Can 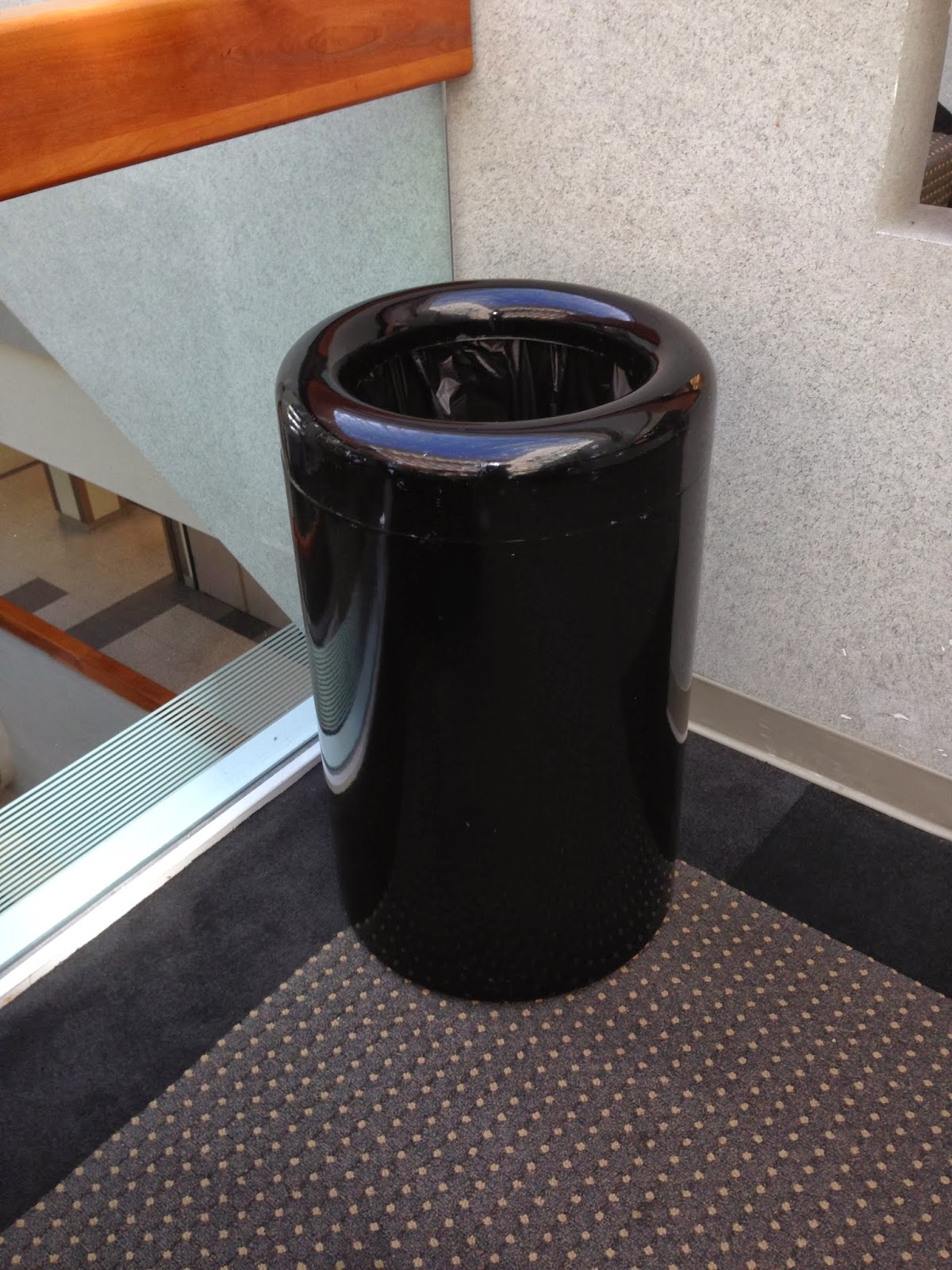 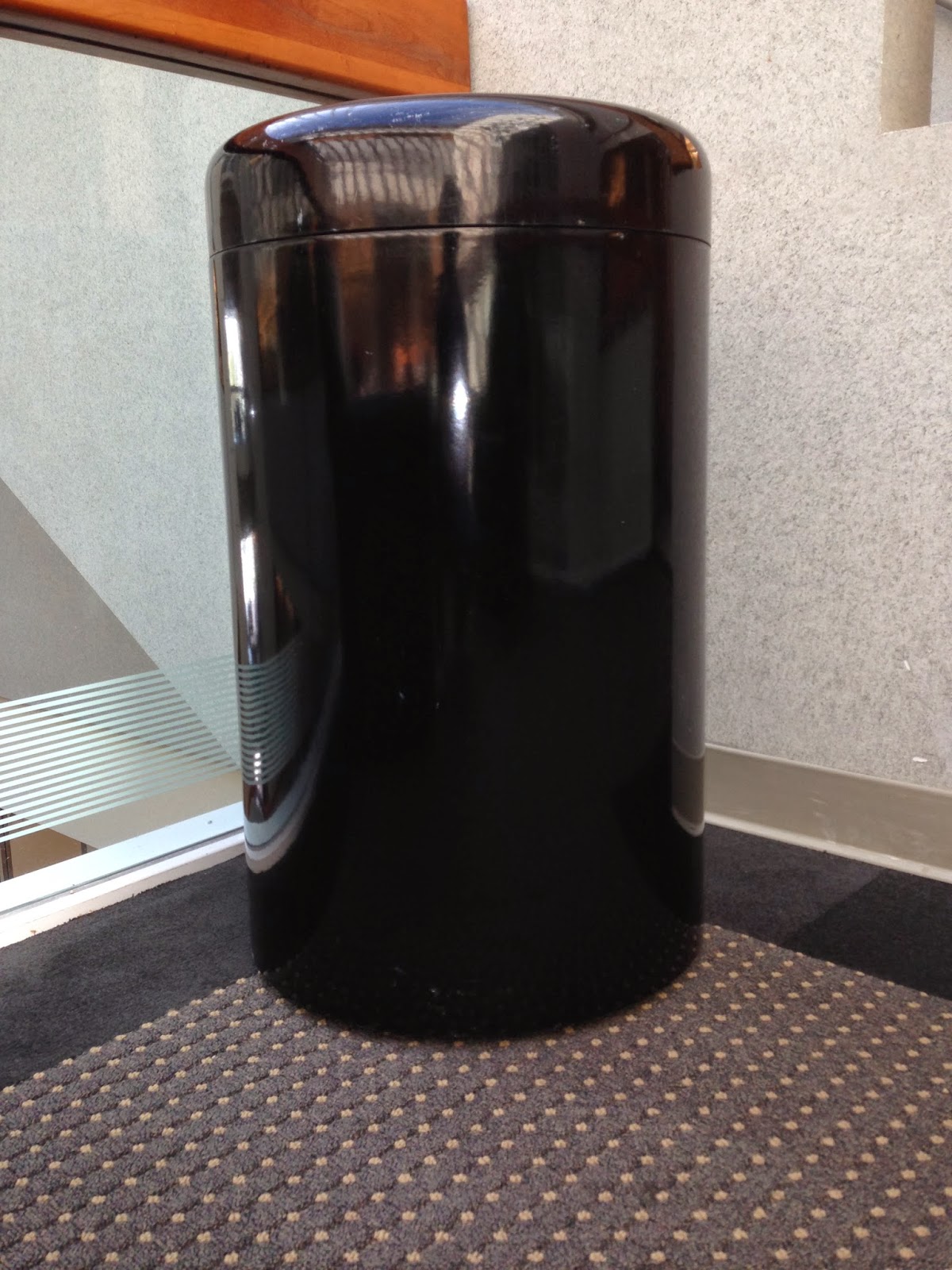 Where is your God now?