Wow, where to begin,

Our latest endeavors on the P(V) front are now published in Science. Now, before talking about the research, I must begin by giving a shout out upfront the (rather large) team who is responsible for everything in the paper. It was an incredible collaboration and everyone had a crucial role to play. 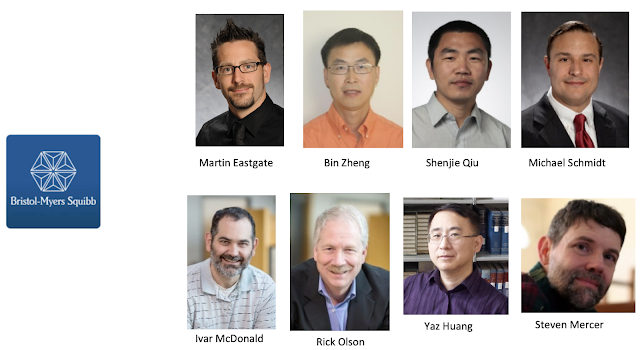 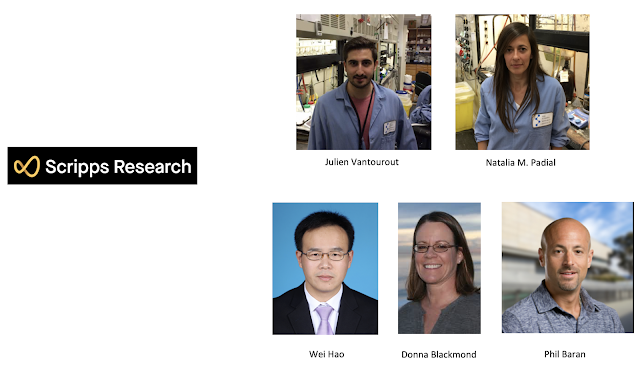 After the team’s initial work developing the PSI reagents for the stereocontrolled synthesis of phosphorothioate linkages, much work remained to build out the P(V) platform, both to include other types of desired P-linkages but also to develop a protocol for using the novel reagents on an automated oligo synthesizer. The development of these additional reagents PS2, PO and RacPS all proceeded in different ways. 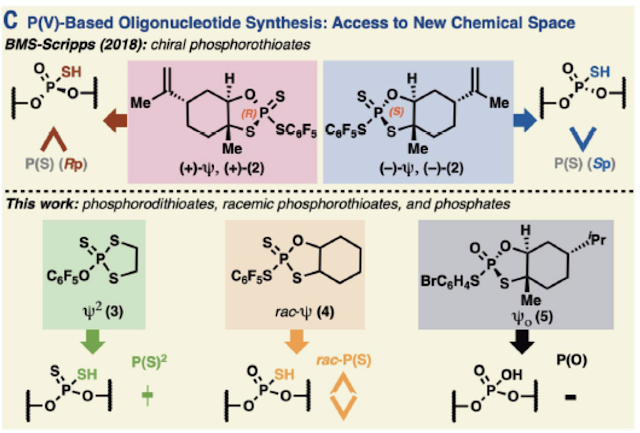 The challenges overcome in the syntheses of the PS2 and RacPS reagents were a simpler story so I'll direct you to finding that info in the publication. On the other hand, there is the P(O) reagent. To the best of our knowledge there had never been a published P(V) reagent capable of forming a phosphodiester bond between two nucleosides with phosphoramidite-like kinetics (i.e. crazy quick). The initial hit for such a reagent came in July of 2018, followed by my famous last words: “shouldn’t take long to find the perfect P(O) reagent” Although the hit was exciting, it required KOtBu as a base and wasn’t compatable with DBU or organic bases that would be amendable to an automated oligo synthesizer.

To address this, we evaluated new P(O) reagents on several criteria:

1. Could they be made (Synthesis)

2. Could they be reacted with a nucleoside to afford a monomer (Loading)

3. Could they be coupled via an organic base with a second nucleoside to afford a dinucleotide  (Coupling) 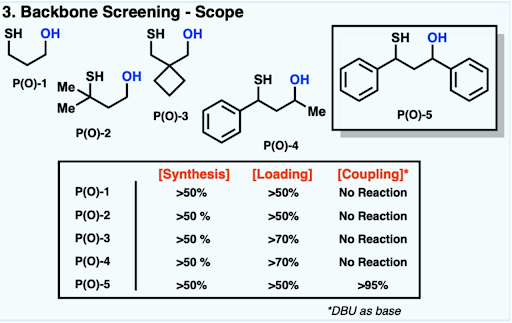 We had two ways of making the reagents, either synthesizing 1,3-mercaptopropanols and reacting them with POCl3 or by generating analogous compounds with 1,3-diols and PSCl3 followed by an interesting atom transposition using TBAI. We found a lot of things that could work (and plenty that couldn’t) but only one scaffold was able to accomplish all 3 of our goals. P(O)-5 the diphenyl scaffold.  After this discovery we investigated the aryl electronics and stereochemistry of the diphenyl backbone. Attempts to modulate the coupling efficiency through the aryl electronics proved negligible.

The stereochemistry was a more interesting questions, because the first synthesis of this reagent used a racemic mixture of the mercaptopropanol, generating a racemic mixture of P(O) reagents which upon loading onto a chiral nucleoside revealed a mixture of the possible isomers that one could imagine. We began synthesizing single isomer versions of these reagents and observed that the Syn scaffold epimerized into an inactive form during the loading step. 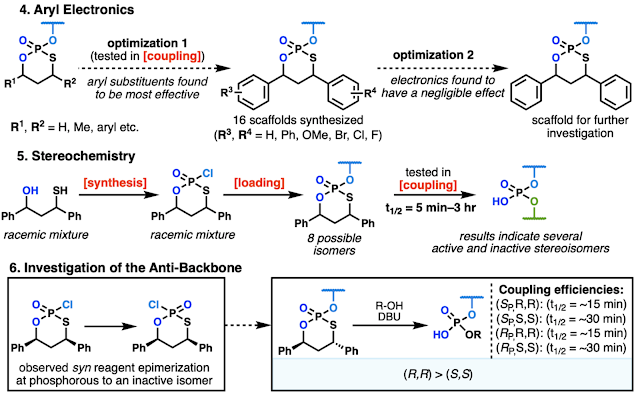 Further investigation of the anti-backbone revealed that the (R,R) substituted system gave the fastest coupling times. We next looked into the synthesis of this reagent, the stereochemistry could be programed in via a Noyori reduction and using PFP as a leaving group provided suitable physical properties to afford a solid reagent. Despite this success, the reagent still had two flaws, it wasn’t stable enough (could only survive about a week on the benchtop) and it was still a mixture of isomers, with one reacting much faster than the other. 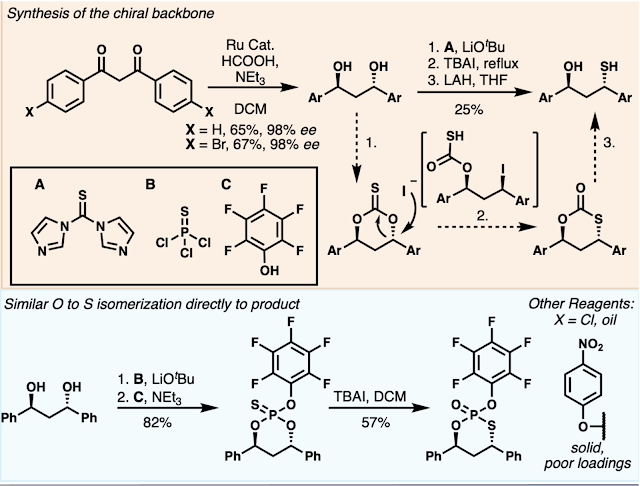 Sitting around the lab one day, we thought to ourselves, why don’t start with the original PSI (a reagent we knew reacted at lighting speed) and swap the S for O? It seemed rather straightforward. In practice we were never able to do this successfully on the PSI reagent itself so we tried it on the PSI loaded monomers instead. Although we could succesfuly perform S-O transpositions on these monomers, there were always side reactions associated with the transformation, ultimately leading us to abandon this approach.

Third times a charm as they always say, so revisiting the idea of performing the S-O transposition on the reagent itself, we knew we the reagent formed with PFTP (PSI) was too reactive after making the P(O) version of itself. So after generating PSI alternatives with different leaving groups, we found that we could successfully perform this transposition to generate a stable reagent, most notably the 4-bromothiphenol version. 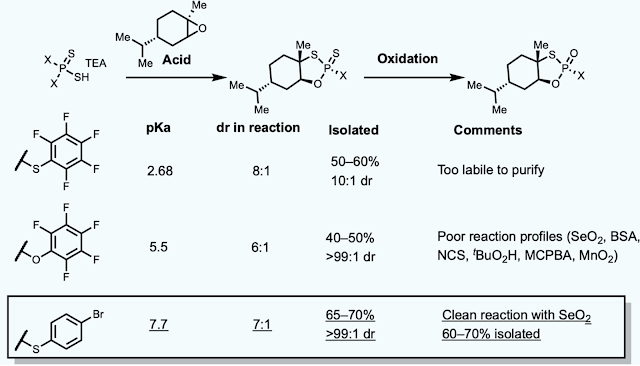 There’s plenty more to the story. We evaluated the kinetics of the P(V) molecules, demonstrating that they are on par with phosphoramidite chemistry, we developed a novel universal linker capable of performing oligo synthesis under the unusual basic conditions found in the P(V) protocol and we even took a trip to Cambridge MA to visit our collaborators at BMS and see and learn first-hand how they were making oligonucleotides. 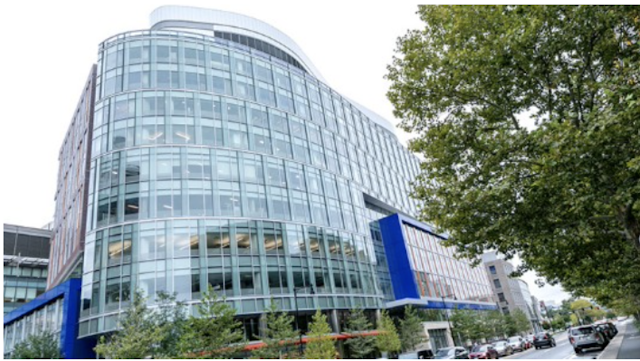 Also, if you’ve read this far it’s fair to assume you’re a fan of the P(V) approach to oligos so check out our perspective on P(V) chemistry that was also just published in ACS Central Science!

If you’re still reading, and want to follow the next steps of the P(V) story, keep an eye out on Elsiebio.com or drop one of us a line to check out how were using the P(V) technology (among other things) to develop the next generation of oligonucleotide therapeutics and “replace dogma with data”.  – Kyle and the P(V) Team