HELLO AND WELCOME TO MARS!!: This post chronicles the path that we took to solve a 45 YEAR OLD PROBLEM and how this led to our exploration of privileged strained ring systems that look like they come from another planet.

It all started in late 2014 when we were approached by Pfizer to provide a kilo-scale synthesis of [1.1.1]Bicyclopentylamine – that’s right…..1KG!! 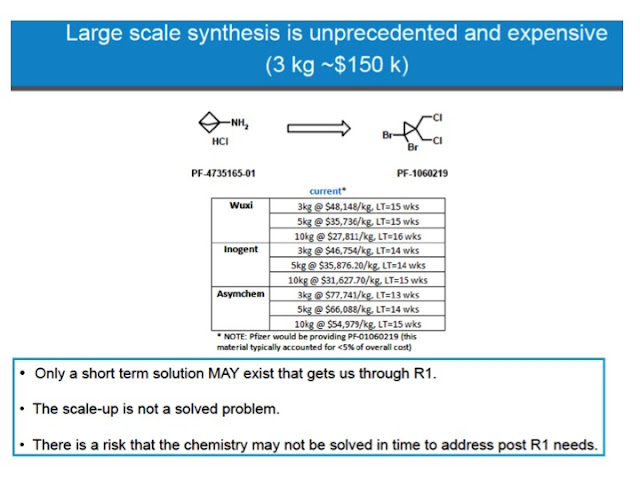 The need for the supply of [1.1.1]Bicyclopentylamine was URGENT as medicinal chemistry programs were HALTED due to lack of a route to provide large quantities of this material for clinical trials. Yes folks, I’m talking about a true REAL WORLD problem that required an immediate response. A problem of this ilk was a first for the Baran Lab and we were definitely blown back on our heels by this seemingly insurmountable challenge. But we
were determined to solve this in order to facilitate the delivery of potential therapeutics to patients.
After conducting an extensive literature search, it became apparent why this structure is so difficult to access in any meaningful quantity. Upon analysis of all of the previous routes, we identified an approach that we felt was the most direct route and thus, the most challenging. Due to A LOT of development in the synthesis of [1.1.1]Propellane, we figured a direct amination across the central bond would be the best approach to solve this
problem. However, we knew that this would be a daunting task as the approach was simple and surely someone has tried to develop this reaction in the past….right? In fact, several innovative attempts were made to directly aminate [1.1.1]Propellane but all of these attempts were 3 steps or more, utilized toxic/hazardous reagents, or provided non-viable intermediates that could not be converted to the desired product.

We were inspired by a report by Ernest Della in 1990 where a halogen-metal exchange and subsequent quench with CO2 was attempted but an unusual reaction occurred whereby t-Buli essentially added across the central bond and was subsequently quenched with CO2. 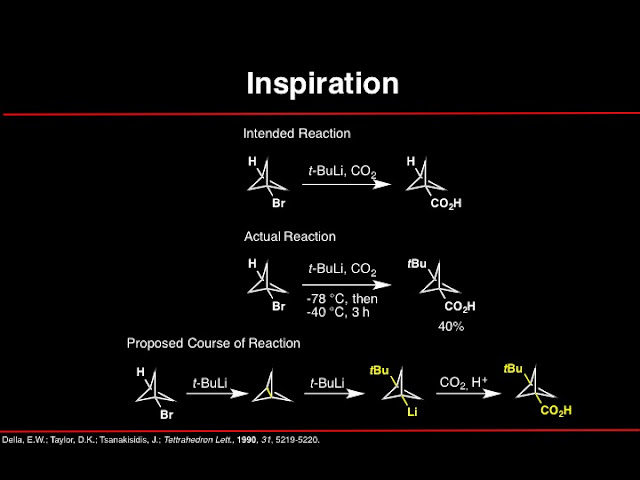 I then wondered if a metalated amine could do the same sort of reaction and it was around this time that Justin courageously joined my project and we sought out to test this hypothesis. During this time, I would often keep saying that "There is a light at the end of the tunnel." and Justin would respond "Umm..yeah...let's hope a train isn't on the other side though." I have to admit, he was right in saying that as this problem was anything but trivial. Anyhow, we pressed on into the dark unknown. 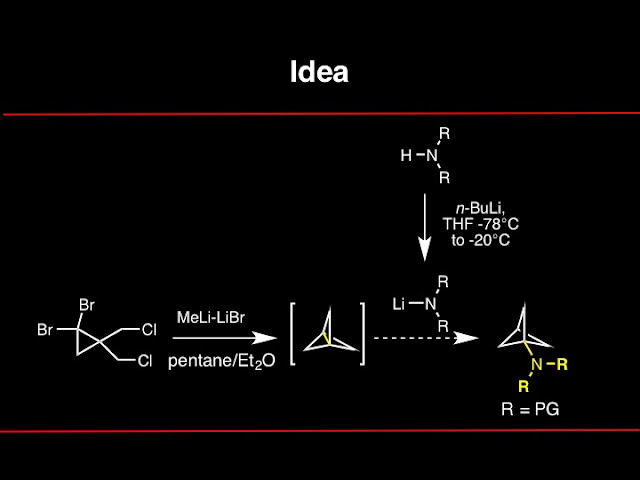 After countless attempts to develop a direct amination reaction, we were finally successful when we generated the lithiated amide of dibenzylamine and added it to a mixture of [1.1.1]Propellane. However, we were somewhat disappointed with this result because we obtained methylated dibenzylamine as a major product of the reaction due to the MeBr that was generated from the Wurtz reaction. Then, we thought we had an “AHA” moment when we swapped out methyllithium for phenyllitium but we just ended up getting phenyl dibenzylamine as the major product presumably from an aryne intermediate (from bromobenzene). 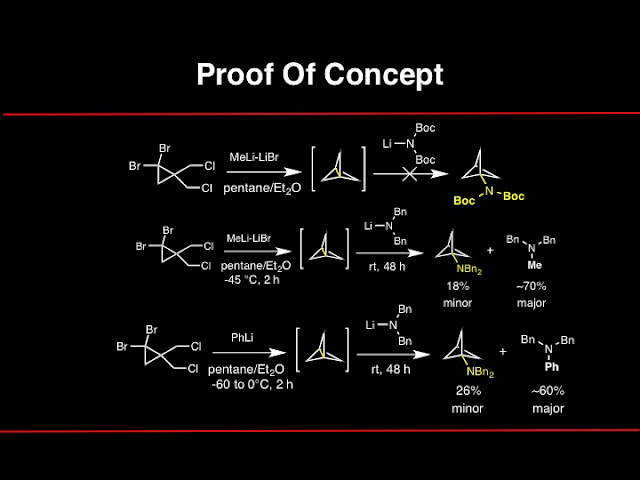 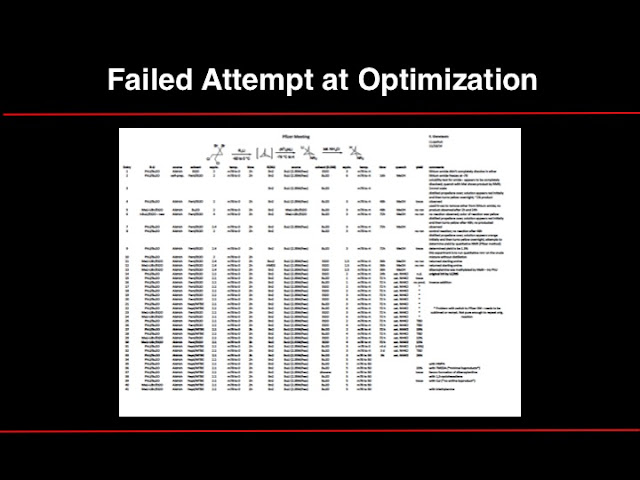 It was during this time that I remembered that Knochel’s turbo Grignard reagents have a similar reactivity profile as non-turbo Grignard reagents but tend to display some subtle differences in reactivity. When we generated our turbo dibenzylamine and added it to an in-situ prepared [1.1.1]Propellane solution and stirred overnight at 50°C in a sealed tube, we consistently obtained yields of 50-60% . WuXi was able to successfully scale-up this reaction on 100g scale and Pfizer developed deprotection conditions using their parallel optimization technology to give us our desired product. 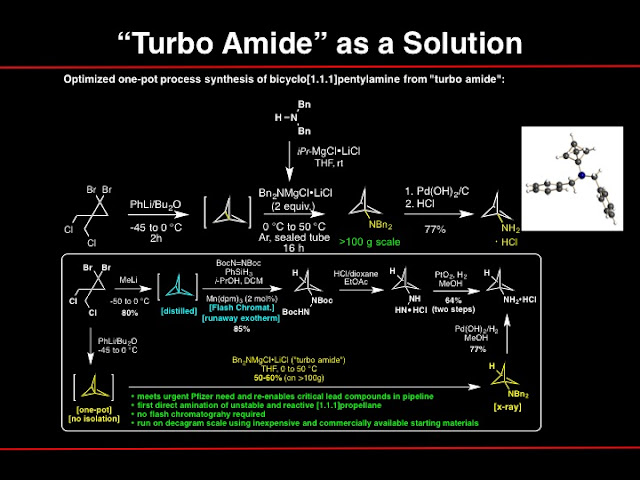 *You can now purchase the starting cyclopropyl-tetrahalide here and  [1.1.1]Bicyclopentylamine here
At this point, we experienced a scientific epiphany when we realized that our new method could potentially be used to "propellerize" ANY amine. I can remember the look on everyone's faces (especially the Pfizer team) when we proposed that compounds such as Paxil could be propellerized directly. The reason for this excitement is borne out of the fact that it is EXTREMELY difficult and even IMPOSSIBLE to incorporate the bicyclopentyl
moiety onto amines; especially amines within complex structures. The reason for this is that chemists are restricted to starting with the bicyclopentylamine and building up the structure of interest around it. While this may be possible for compounds such as tetrahydroisoquinoline, it is nearly impossible for compounds such as Paxil. 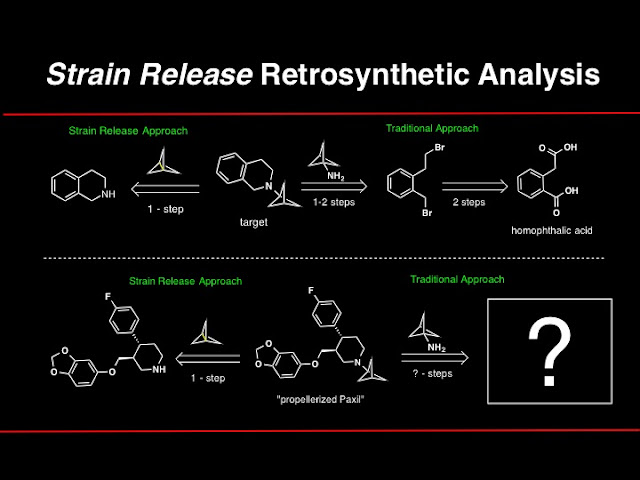 Next, we wondered if we could use our newly developed reaction to directly aminate compounds that would be of interest to medicinal chemists. To investigate this approach, we prepared a stock solution of [1.1.1]Propellane by running the Wurtz reaction and distilling the resultant solution via rotovap. It turns out that this methodology was very general and we were able to “propellerize” a wide range of secondary amines including drugs such as Paxil (Paroxetine) and Zoloft (Sertraline). 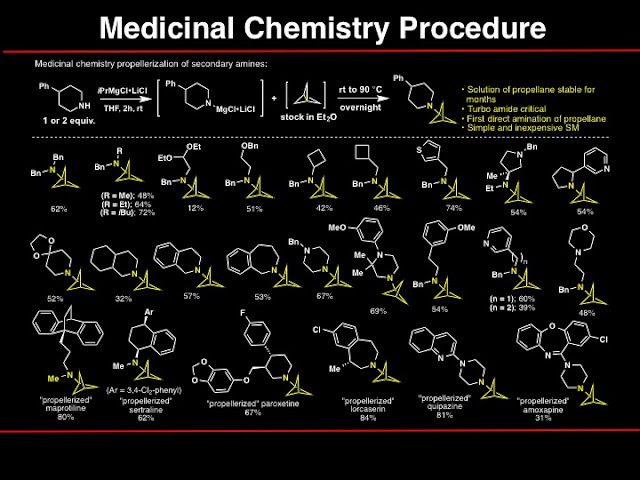 "Turbo Azetidination"
Next, we wondered if we could extend this methodology to other strained ring systems. We became aware of a strained precursor to azetidines [1.1.0]Azabicyclobutane or ABB. So, we prepared ABB in-situ from the tribromide precursor and we successfully aminated it with a range of amines and trapped the resulting amide with Boc anhydride. 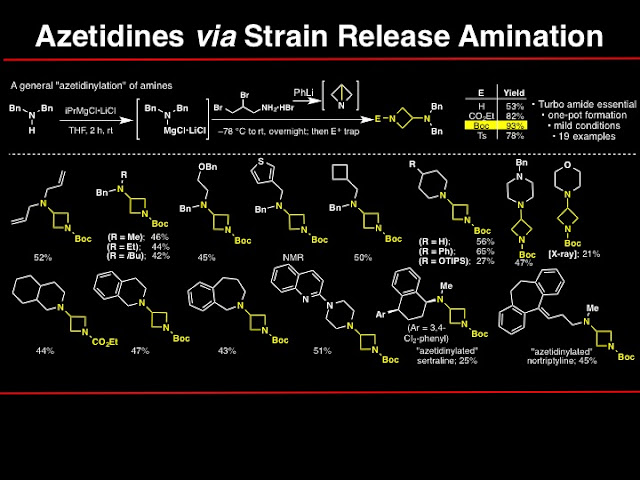 Cyclobutylation with "Designer" Bicyclobutanes
Another strained ring system that we were interested in functionalizing was [1.1.0]Bicyclobutane for the synthesis of “cyclobutylated” amines. After attempts to functionalize bicyclobutane failed, we realized that we would need an anchoring group that was attached directly to bicyclobutane to make this reaction feasible. A reaxys search revealed that substituted phenylsulfonylbicyclobutanes could be aminated under high temperature in a neat mixture. Since we believed that a method to directly append cyclobutanes onto amines would be of value, we sought out to explore ways to make this reaction broadly applicable. We started by reasoning that placement of EWG’s on the phenyl ring would increase the reactivity of the central bond which could allow for milder conditions which would hopefully lead to a broad substrate scope. After synthesizing a range of substituted phenylsulfonylbicyclobutanes, we chose to move forward with the 3,5-difluoro derivative because it offered a nice balance between reactivity, scalability, substrate scope, and cost. We were able to develop a room temperature cyclobutylation sequence by stirring the phenylsulfonylbicyclobutane with an amine in the presence of LiCl using DMSO as the solvent. The substrate scope of this reaction is VERY broad and we were able to synthesized these cyclobutylated amines in a facile manner. It is also noteworthy that we were able to make cyclopentylated derivatives. 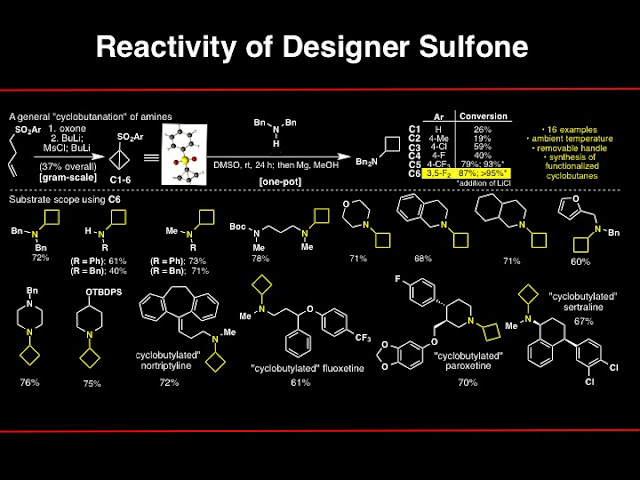 During of our investigation of strained ring systems, we became aware that thiophenol adds readily across the central bond of [1.1.1]Propellane high yield. We then wondered if the same type of reactivity could be displayed in our arylbicyclobutanes. We tested a reaction between our arylbicyclobutane and cysteine and we detected product in a matter of minutes. We were aware of the use of acrylates in bioconjugation chemistry and drugs such as dimethylfumarate that serve as acceptors for thiols. Generally, the aforementioned Michael acceptors often interact in a myriad of “off cycle” events and tend to not be very “tunable.” Since our bicyclobutanes can be easily modified, we speculated that they would display high reactivity with thiols but we were unsure as to their specificity. We tested our bicyclobutanes against glutathione (GSH) and it not only showed to have high reactivity but it was also completely selective for the sulfur atom. To further investigate the selectivity, we prepared a peptide that had one cysteine residue and our reagents showed complete selectivity under the same reaction conditions. While traditional reagents in bioconjugation did show reactivity, they were not completely selective for cysteine residues. 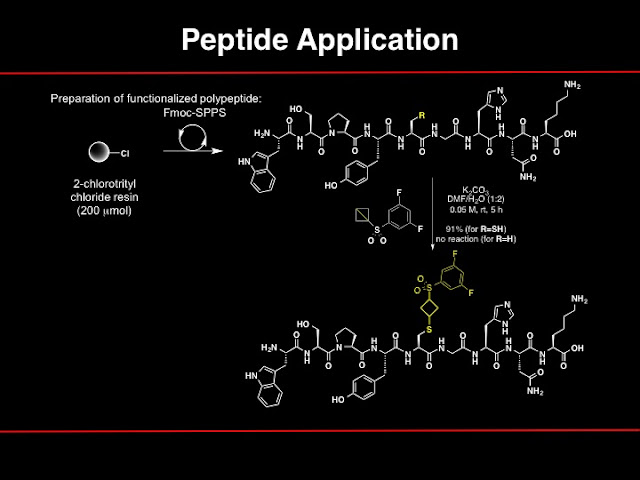 With this exciting result in hand, we believe that scientists can use strained ring systems as an alternative and perhaps improved approach for bioconjugation and drug development.

I am truly grateful to ALL of my Teammates who worked with me on this project including Justin Lopchuk, Lara Malins, Jie Wang, Eddie Pan, Mike Collins, Jillian Spangler, Gary Gallego, Neil Sach and the rest of the Pfizer team. You are all CHEMICAL ASTRONAUTS!!