Today, we are excited to say that our efforts in decarboxylative alkynylation were published in Angew. Chem. Int. Ed.  This story starts out with a historical context, beginning with those pesky synthesis problems most folks toiled over as undergraduate organic chemistry students. I, myself, remember learning at Furman that alkynes were amongst the most useful synthons in all of chemistry provided the fact that they could be nucleophiles, electrophiles, oxidized, reduced, etc. It seemed as if they could do everything! There was a catch, though.  For most, one of the only ways to introduce them on an exam (while limited to building blocks of two carbons or fewer) was to use some sort of alkali or alkaline acetylide. And, even so, most only learn that most reactions involving these types of organometallic reagents were limited to carbonyl additions! In effect, this left us with “alkynes” of problems. How could it be possible that there could be a functional group so malleable that had such limited avenues for its installation?! 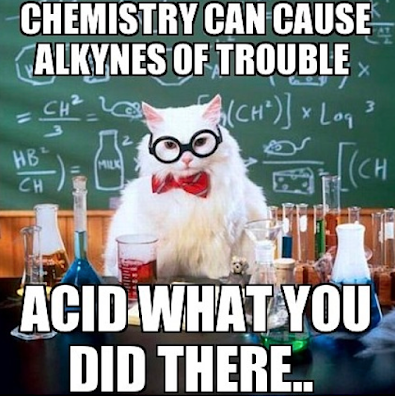 When most of us entered graduate school, we learned there were more ways of installing alkynes than simple addition of your friendly sodium acetylide into a carbonyl. If only we had the Corey-Fuchs and Seyferth-Gilbert homologations (arguably beyond the scope of most undergraduate foundational curricula) for those undergraduate exams, it’s possible we wouldn’t be looking back at the world’s clunkiest synthetic sequences. Even so, we still found that there was room for improvement in the world of chemistry between carbonyls and alkynes. Given our recent efforts in decarboxylative coupling, we decided to expand our menu of reactions to alkynylation, with an initial aim at streamlining these heralded homologations. 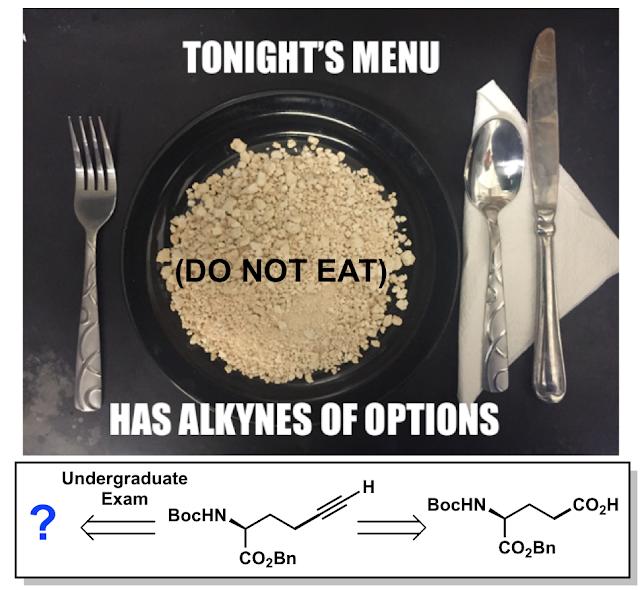 At the same time, we were inspired by how difficult certain alkynes were to access. I think putting the glutamic acid derived alkyne (see above) on an undergraduate exam would be a toughie, definitely one that would require an extra spare sheet of “loose-leaf” for scratch work.
To make a long story short, we found the optimal conditions to decarboxylatively alkynylate a number of redox active esters derived from parent carboxylic acids with ethynyl zinc chloride as a nucleophile. Luckily, this salt was both cheaply prepared from zinc chloride and its commercial Grignard, and small enough to fall within the 2-carbon limit of most exams. We were able to expand upon this initial formal homologation reaction to couple substituted alkynes too, albeit with a different Fe catalyst system. Additionally, some critics of this chemistry have argued that it isn’t “atom-economical” and that the 3,4,5,6-tetrachlorophthalimide byproduct creates a lot of unwanted waste. We are happy to report that the byproduct is isolable and can be converted back to TCNHPI for further use if practitioners desire.

After making a bunch of different alkynes, we did want to validate the undergraduate teaching regarding their versatility. As shown above, we were able to accomplish formal difunctionalizations of “acetylene” starting with the nickel catalyzed homologation reaction followed by coupling the product with another acid using iron catalysis. Furthermore, we could also make highly stereodefined alkenes through a hydrozirconation/Ni-catalyzed cross-coupling event (See manuscript for more details). In addition to these examples, we were also able to establish a short formal synthesis of a natural product. But, one of the greatest parts of this adventure was working with AsymChem in Tianjin, China to evaluate the scalability of the homologation protocol.  We were delighted to learn that the reaction was operative on 1 mol scale (see below), and the AsymChem team were able to synthesize and send us ~180 g of the alkyne derived from the side-chain coupling of a protected glutamic acid derivative (See dinner plate in upper picture).

At this point, Phil posed an interesting question to us: “What is the best thing we can do with this material?” We didn’t really know for sure, and were amazed at his idea. Phil said “We should give it away for free via Twitter.” To this end, we agreed that we weren’t going to be able to use all of it ourselves, and it seemed like a good opportunity to pay it forward. You can request some of this alkyne by first filling out this form and emailing it to either jmsmith[at]scripps.edu or tianqin[at]scripps.edu with a viable address for shipping, and we will send you 1 g to do whatever you would like with, while supplies last. Also, as a side note, we found that there is ample opportunity for great puns using the word “alkyne.” Feel free to leave your best ones in the comments!


Joel and the Alkynylation Team

P.S. Stay tuned for an elegant and complementary approach from the Weix group!
Posted by BaranLab at 7:13 AM 18 comments: