“What’s cooking?” was the question that Phil had asked me whenever he wanted to start a conversation back when I was a second-year student. Apparently, at that time, he was into “what’s cooking in chemistry.”  In this post, I would like to talk about how did we come up with the idea of using quinone diazides in "our recipe" (a recent ACIE publication,) but firstly…what is a quinone diazide? it is a "handsome" diazo compound! We classify it as an acceptor/acceptor diazo compound. It was discovered in the 19th century, so it’s a really old species. Diazonaphthoquinone (DNQ), an o-quinone diazide, is commonly used in a positive photoresist called DNQ-Novolac photoresist.

When I first joined the lab, I was given a retrosynthetic analysis of prednisone, a precursor of cortistatin A.  In Baran lab terminology, my research topic is described as “ a cyclase phase of steroids.”  Breaking the B ring of a steroid probably results in the most convergent synthesis, and according to Corey’s retrosynthesis logic book, it is a topologically strategic disconnection. Interestingly, Denmark has proposed an identical retrosynthesis for the cortisone skeleton, and has successfully made the right side, but has never accomplished the molecule (TL, 1984, 1231).  Personally, at first I wasn’t really into this project because originally I wanted to deal with reactions that are “weird,” reactions that you don't really get what is going on without deeper thought. However, since I didn’t have anything else in mind or other options, I told Phil “yes” after a week of consideration.

The key step of our retrosynthetic analysis is an enol-phenol oxidative coupling that can go wrong for a hundred reasons: thermodynamically unfavorable (dearomatization), kinetically unfavorable (para is more sterically hindered), and stereoselectivity issues... After trying this key step for 9 months without achieving any C-C bond coupling, one afternoon, Phil called me to a white board and started discussing about other retrosynthetic possibilities.  At one point during the discussion, Phil accidently (!) connected the C9-C19 bond to make a cyclopropane and asked me if we can make it from…the corresponding diazo compound. Looking at the weird diazo compound for a few seconds, Phil shook his head, and asked me to come back for another discussion.

When I went back to my office, thinking about the strange species, Will (a senior student at the time) yelled to me “it exists!!!” …Apparently Will had also witnessed our discussion and immediately ran a Scifinder search.  I conducted more detailed searches and brought it to Phil’s attention.  He replied, “this is it, Hai!” and this was how we “re-discovered” quinone diazide chemistry.
I quickly prepared a simple substrate to test the key reaction.  Luckily, it worked perfectly after several trials.  I went to discuss with Phil after confirmation of the desired product, and in less than 5 minutes, he gave me a “recipe” (this was around July 2012).  If you have read our paper (accepted in Aug 2014), you could easily recognize that the only thing different was that it’s in ACIE instead of JACS, or the lack of some “flavor” that I couldn’t achieve. 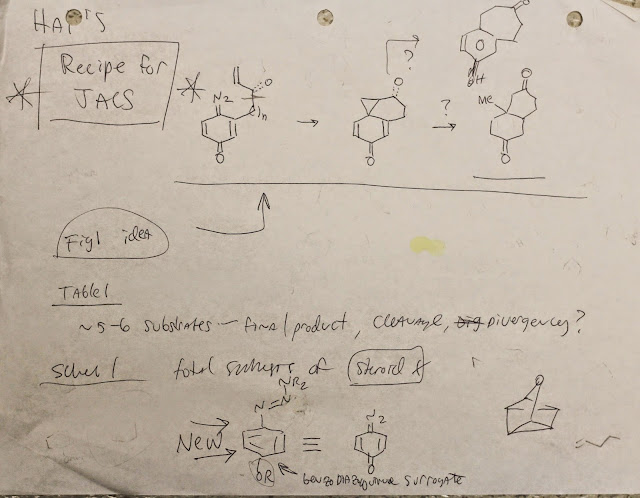 I continued working on this recipe for the next two years.  It took me less than two weeks (14 days) to make the model substrate (without the D ring), however, it eventually took me more than 14 months to make the desired cyclopropane. The rate-determining steps were: making the right side, conditions for the conjugate 1,4-additions (Turbo Grignard was superior), and finding the magic effect of sub-stoichiometric Li2CO3 as an additive for Eschenmoser’s methylenation, and of course the scale-up.  However, I was lucky with the double deprotection to release the quinone diazide and the key cyclopropanation, which worked at the first try.


The cleavage of the other two C-C bonds of the cyclopropane intermediate was achieved easily, but the C9-C19 bond (that Phil accidentally connected) was unbreakable, even after half a year of hard work.  This is kind of unfortunate because the product of that C-C bond is a natural product, a really important “flavor” of the recipe.  Another 4 months of optimization in the reaction of quinone diazides with olefins (Table 1 in “recipe tables” or 1 and 2 in the paper), and Phil let me submit, and luckily the recipe was accepted to Angew. Chem.
Posted by dth at 4:03 PM 4 comments: