Since our first report in 2011 on the trifluoromethylation of heterocycles, sulfinate chemistry has been demonstrated to be a useful tool for drug discovery. The lab extended this chemistry beyond trifluoromethyl radicals to a whole host of other useful substituents that medicinal chemists find desirable. We even went as far as to show that one could functionalize caffeine in its native habitat: oolong tea!   Sulfinates have a wide range of useful applications: They can be used to forge heteroarylether bioisosteres, to label and tag compounds that have no obvious sites for functionalization ("native chemical tagging"), accomplish practical direct methylation without the misery of purification that other methods face, and even empower medicinal chemists to predict non-cytochrome based metabolism processes (we've received an enormous amount of positive feedback from companies on this).

Sulfinates can be easily prepared, even really exotic ones. Their reactions are not chaotic as people used to associate with radical chemistry – they are actually quite predictable as we showed in collaboration with the Blackmond lab. If there are process chemists interested in this chemistry, it can even be scaled up using electrochemistry.

As we had hoped, the main consumers of sulfinates are those residing in pharma as shown on the graph below, kindly provided to us by Aldrich.

The feedback we have gotten is that people really like the simplicity of the reaction setup and the ease with which the diversity of their scaffolds can be effortlessly expanded. This chemistry saves people a lot of time and can sometimes deliver analogs that would never have been made due to time constraints. A typical example is shown here: 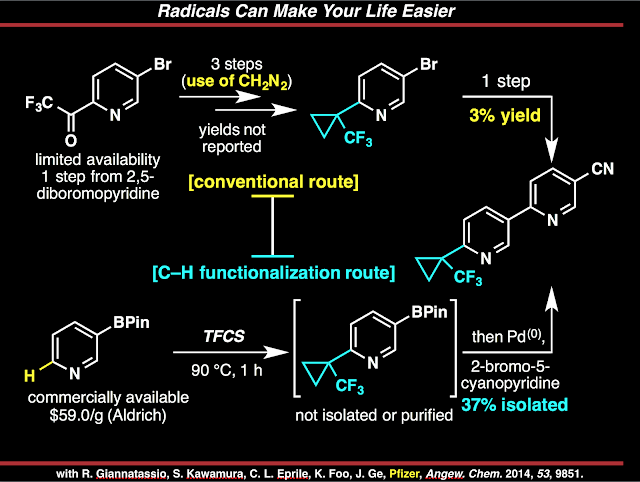 Aldrich is planning on rolling out a number of new sulfinates (now marketed as "Diversinates") and they even sell a number of the reagents in a pre-made kit allowing medicinal chemists to easily automate lead diversification.

They prepared this nice Brochure and sometimes even run humorous ads in C&E news like this one:

We hope the pharma community can continue to benefit from the robustness and unique chemoselectivity of this radical chemistry.

Here’s a behind the scenes look at one of our newest papers in JACS that highlights some nickel chemistry that we have developed!  Phil has been interested for quite awhile now in transition metal cross-coupling methodology.  A few ideas with various metals have bounced around the group, but unfortunately nothing managed to stick.  Fortunately, Pep (commonly referred to as Dr. Pep around the lab) had a lot of previous experience working with transition metals, and within a few weeks of insanely hard work he got the first hit on a reaction that provided the basis for the new paper. Inspired by our lab’s previous work with Barton esters, Pep thought that maybe he could irradiate the Barton ester and trap the resulting alkyl radical – before it recombines with the thiopyridyl radical – with a preformed Ni-Ar complex, which could then reductively eliminate to give a new sp2-sp3 C-C bond.  The reaction not only worked but also gave a decent yield (~50%)!!!

I was actually in Phil’s office that same day, talking about some other ideas for projects, when he looked at me and said, “There has been a breakthrough.” At this point I was lucky enough to join Pep on the project. I had some experience working with organozinc reagents and quickly realized that arylzinc coupling partners could react without destroying the starting material, so we began our optimization. I want to give a shout out to Paul Knochel and his group; we prepared our organozinc reagents using methods they’ve published that are user-friendly and easy to follow. At first we continued to irradiate the reactions during the early stages of optimization, but it didn’t take too long to realize that the reactions took place with essentially the same yield in the complete absence of light!

While we were getting serviceable yields of product using the Barton esters, they were somewhat impractical (even though we didn’t need light). They required quite a bit of care when preparing them (all flasks, separatory funnels, columns, column fractions, etc had to be shielded from light), and even with careful storage we found they would decompose, so felt like we were beating our heads against the wall trying to optimize the reaction. Because of the problems associated with the Barton esters, we switched other types of activating groups for the carboxylic acid; in particular, we looked at N-hydroxyphthalimide (NHPI) esters and found that they also worked! After a decent amount of the usual optimization screens (solvents, ligands, nickel sources, etc), we found that these NHPI-esters worked pretty well (92% with NiCl2•glyme and 93% with NiCl2•6H2O).  We also found that for some substrates, swapping out the NHPI ester for the more electron-withdrawn 4,5,6,7-tetrachloro-N-hydroxyphthalimide ester improved the yield; notably, the ortho-substituted anisole substrate 9 failed to give anything more than 10% yield of the desired product, whereas simply switching to the tetrachloro analogue provided a serviceable yield without any other change to the reaction conditions!

While it’s nice being able to isolate these esters and just weigh them out and dump them into the reaction flask, a one-pot procedure to do both acid activation as well as the cross-coupling reaction could be useful for someone who wants the product as quickly as possible (time is money, right?).  We found that activated esters employed in peptide coupling such as HOAt and HOBt esters could be made in situ from HATU/HBTU and your favorite amine base like triethylamine, and then the cross-coupling could be run in the same reaction flask.  In some cases, such as the coupling of the 3-pyridyl zinc reagent, making the ester by this method actually gave a higher yield than either the NHPI or 4Cl-NHPI esters for substrate 31.

We found that this reaction scaled pretty well up to one gram and probably even larger scales if desired, and thanks to our collaborators Mike Schmidt and Martin Eastgate from Bristol-Myers Squibb, it seems that employing these esters on process scale is safe and viable. Pep and I also want to thank Tian, Shuhei, Jie, and Eddie for jumping on board and helping us to finish up the substrate table in about 2 days and Ryan for lending his expertise on Barton esters. It was great working with all of these guys!

One nice thing about this reaction is that it’s easy to run; it doesn’t require rigorous drying of glassware, and once you have a solution of your arylzinc reagent (many of which are commercially available or can be prepared in a straightforward manner (even one of our first-years managed to do it right on his first attempt J)), the reaction is just dump and stir at room temp overnight!  No fancy equipment is required, and you get to see some pretty cool colors!  Even though I’ve run this reaction probably close to 1000 times, seeing the color change from green/blue to orange is always exciting.  Just as a note, we recommend that you run this reaction with inhibitor-free THF, as we found using THF with BHT dramatically decreased the yield.

We are very excited about extending this work to new reactions: sp3-sp3 C-C bond formation, alternative transition metal catalysis, construction of quaternary centers, enantioselective reactions, and applications in total synthesis only represent a small portion of the myriad of directions we plan to take this chemistry.

If you’re curious about what it’s actually like to run this reaction and want to try it for yourself, we’ve included a step-by-step pictorial guide in the Supporting Information section that details the entire process of the reaction.  We’ve tried to be as specific as possible, but if you have any questions, please feel free to email me (jedwards@scripps.edu) or Pep (cornella@scripps.edu)! 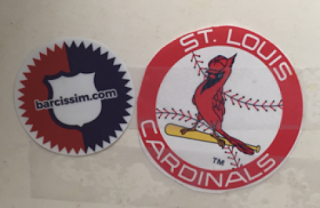 Thanks for being supportive all these days at the back of the fumehood!
Posted by Unknown at 3:08 PM 31 comments: