Our latest work in the field of iron chemistry came out today in Science. First we would like to present a graph (shown below) on how this newly developed chemistry could simplify the synthesis of some biologically active intermediates: starting from the same starting material, this reaction only took one step and 1 hour to get the desired product, while the traditional route required 3 steps and 29 hours in order to get the same product. Taking all the estimated cost (materials and labor, for 1.5 g product) into account, this chemistry would start from 30¢ of iron catalyst, and save the total cost by ca. $1388 (1.2 oz of gold). In essence, this is the modern equivalent of the Alchemist’s dream of turning iron into gold. 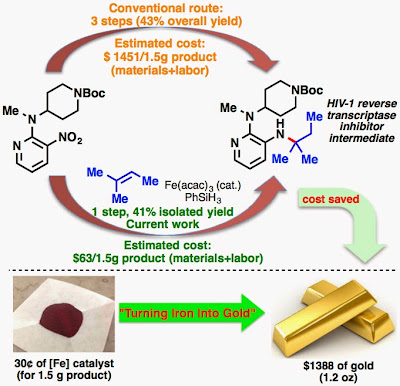 Unlike our previous two papers in this area, which focused on the formation of C–C bonds, this time we developed a method for the construction of C–N bonds, more specifically, a reaction for the synthesis of highly hindered secondary aryl amines. Since all the scientific details are described in this research article, this blog post will serve to give our readers the background of this project.

First, how we discovered this reaction is a story on its own. During an ongoing project regarding new applications of iron-mediated bond formation, an unexpected product was isolated in 17% yield (scheme below). After full characterization, it was clear that it was a secondary aryl amine derived from a formal hydroamination process between the olefin and nitroarene. At that time, I didn’t fully realize the importance of this product and the transformation that had occurred, so I only reported this “unexpected” result to Phil after TWO weeks. But in 10 seconds, he replied: “Wait! Wait! This reaction is interesting!” In another 1 min, Phil was able to convince me (which he is naturally good at) of the high novelty of this discovery, and from then on, this new approach of hydroamination was developed.

Second, the mechanism of this reaction is indeed complicated. Even though we had performed a series of control reactions, we are still not quite sure what actually happens in the reaction. For this reason, we decided to move the mechanism proposal from the main text into the SI (detailed discussion on mechanism there). But in general, we propose that the nitrosoarene is the reactive intermediate, and the unique effectiveness of the iron catalyst plays a key role: it reduces the nitroarene to the nitrosoarene, and the olefin to the alkyl radical; then, these two reactive species combine with each other without over-reduction by the iron catalyst to give a fully reduced aniline or an olefin hydrogenation product. Notably, the cobalt and manganese catalysts completely failed in this reaction, since they were shown to be unable to reduce the nitroarene to the nitrosoarene (a convincing TLC plate is shown in the SI, Fig. S2).

Third, in the paper, we presented over 100 examples to show the broad scope and generality of this reaction, which seems to be an unusually large number for a methodology paper. But in fact, this project only took 6 months from beginning to end due to some great teamwork. On the one hand, with the fantastic teammates (Eddie, Jin, Tian and Julian) at Scripps, we managed to build up the substrate scope, synthetic applications, as well as limitations very quickly and efficiently; on the other hand, through working with industry (BMS & Kemxtree), this chemistry was field-tested immediately by different research organizations. In late February of this year, our lab published our views regarding academia–industry symbiosis. Indeed, this project is another good example for the collaboration between academia and industry. As you could see in the main text and the SI, the examples provided by BMS (marked in blue in the SI) exemplified its utility in medicinal, process, and radiochemical settings, and the decagram-scale results provided by Kemxtree (also marked in blue in the SI) showed its feasibility in large-scale settings.

Lastly, it is our lab’s publication tradition to show the limitations of the methodology being developed, in order to give the readers a better understanding of the reaction. Some of the limitations for the hydroamination are shown in Fig. 5 of main text, and here we provide more examples. The contents below may be helpful for those who decide to give this reaction a try for similar substrates.