Recently the Reid Group at University of Strathclyde reported a mechanistic study of electrochemical benzylic oxidation with the use of ElectraSyn 2.0 (ChemElectroChem 2020, 7, 2771). During their study, the group observed unexpected product distribution change when alternating polarity was applied during a constant voltage experiment with ElectraSyn 2.0. The report describes their careful investigation of this phenomenon, and casts a practical consideration on users of IKA ElectraSyn 2.0. 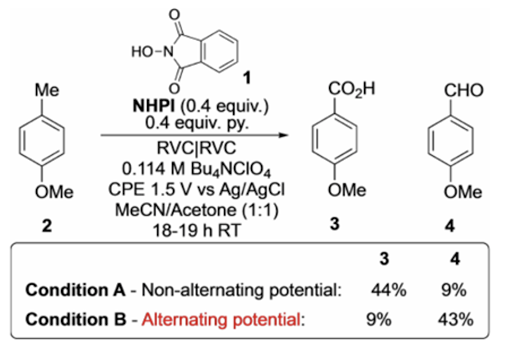 Here is the key points of their report:

·       During alternating polarity, the same magnitude of current would be expected in both positive and negative phase. However, the observed current magnitude was totally different between these two phases.

·       We verified asymmetric current distribution in the same setting described in the report (constant voltage–reference electrode ON–alternating polarity ON).

·       This is simply originated from how voltage is controlled in ElectraSyn 2.0.

·       Accordingly, ElectraSyn 2.0 does not have engineering concern.

Although we confirmed that ElecraSyn2.0 does not have any engineering flaw, we updated ElectraSyn 2.0 software to enable equal current distribution in the above experimental conditions (constant voltage–reference electrode ON–alternating polarity ON). 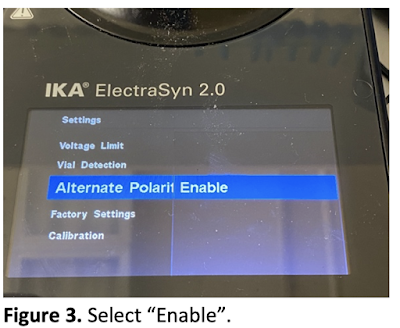 When this setting change is needed

Effect on past research

The issue only occurs when Constant Voltage reaction mode with Reference Electrode ON and Alternating Polarity ON. In other conditions, current and voltage control is accurate and experimental data is reliable.

Detail of our investigation

IKA ElectraSyn 2.0 provides many functions that satisfy different requirements for electrosynthesis. Among those functions, Constant Voltage is a reaction mode where the reaction is executed at a fixed voltage. This reaction mode is generally more selective than Constant Current mode, though the reaction time tends to be longer. Alternating Polarity is an option that periodically switches anode and cathode. This option is useful when electrode fouling is observed. Switching polarity helps to alleviate accumulation of deposit. Both Constant Voltage and Alternating Polarity are routinely used for electrosynthesis.

The recent report by the Reid group described a mechanistic study in synthetic organic electrochemical method development with the use of ElectraSyn 2.0 (ChemElectroChem 2020, 7, 2771). In this report, unexpected product selectivity change was observed in electrochemical benzylic C–H oxidation of toluene derivatives by employing Constant Voltage alongside Alternating Polarity function equipped in ElectraSyn 2.0. 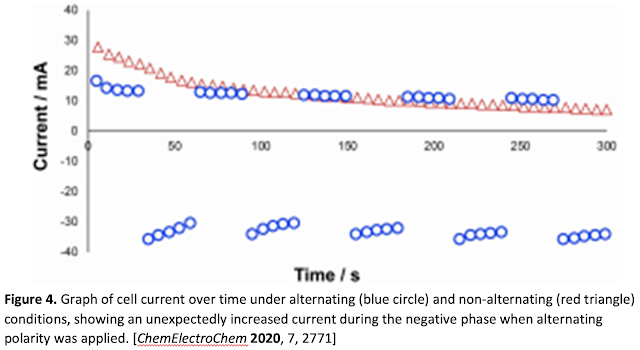 Further in-depth investigation of cell potential with alternating polarity revealed that the voltage during the negative phase was not controlled. The set voltage was 1.5V, which means the reaction voltage should alternate between 1.5V and -1.5V. However, the observed voltage was clearly not in this case. 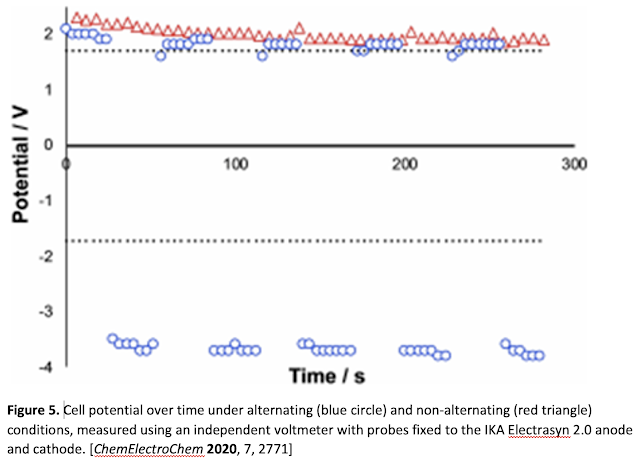 In additional tests, a rapid degradation of NHPI was observed in Alternating Polarity experiments due to this unexpectedly high current input. Such degradation leads to the unexpected product selectivity.

Accordingly, the group published their findings to highlight an equipment engineering concern that is likely to influence and inform optimization strategies for a wide range of synthetic organic electrochemical methods under development.

To ensure product quality and to further improve EletraSyn2.0, IKA has conducted a thorough inspection of the instrument as well as detailed investigation of this issue. It turned out that the varied cell potential was caused by the way ElectraSyn 2.0 controls voltage against the reference electrode. 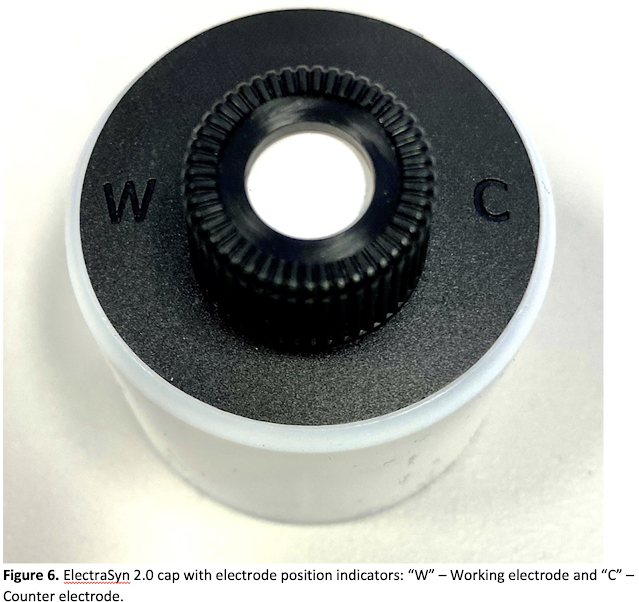 However, WE and CE do not necessarily indicate anode and cathode in electrolysis. WE can be both anode and cathode. For example, if 1.2 V is applied, WE will play the role of anode and the voltage should be set as +1.2 V between WE and RE. 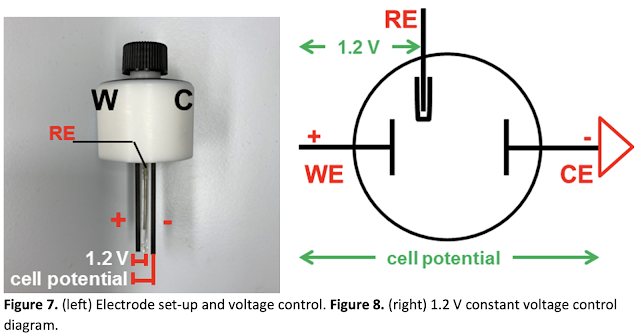 On the other hand, if -1.2 V is applied, WE will play the role of cathode. 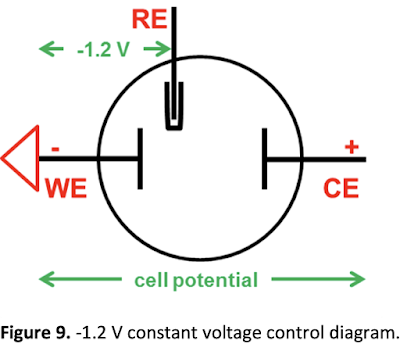 During alternating polarity, what is expected is the cycle of applying +1.2 V between WE and RE, and then +1.2V between CE and RE. 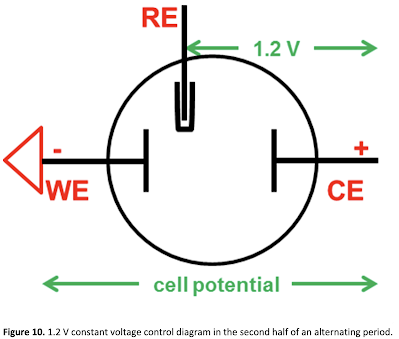 However, in the current ElectraSyn 2.0 software, the voltage control remains between WE and RE during the entire period. This means that applying -1.2V between WE and RE may induce completely different reaction, resulting in the observed asymmetric current behavior.

In other words, if ElectraSyn 2.0 could switch WE and CE during alternating polarity, the problem of asymmetric current will be solved. This function was installed in an updated software.

After our investigation in software development, the aforementioned voltage control method was implemented. Users are provided with the option of enabling/ disabling the alternate polarity, with the latest software version (0.0.026 / 0.0.027). 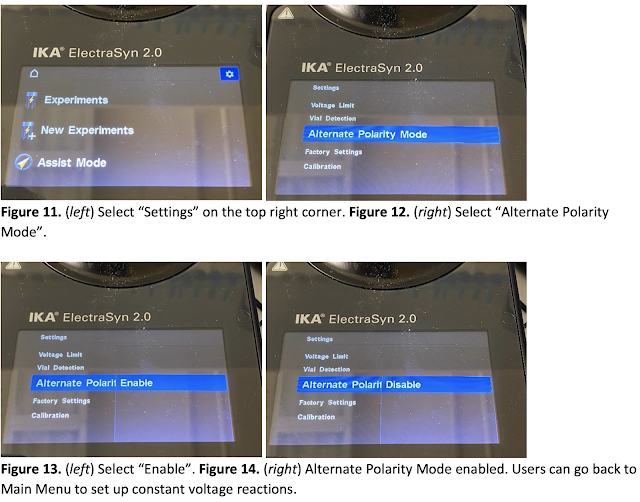 The new software version was validated by using following test. In the first test, the solution containing 0.114 M Bu4NClO4 with acetone/MeCN = 1/1 ratio was used. As pointed out by the Reid group, constant potential mode with reference electrode-ON and alternating polarity-ON gave asymmetric current (blue circle in Figure 15.). When the setting is changed as illustrated above, totally symmetric current was observed (orange circle).

This test was conducted with another solution, verifying symmetric current behavior in this case as well. 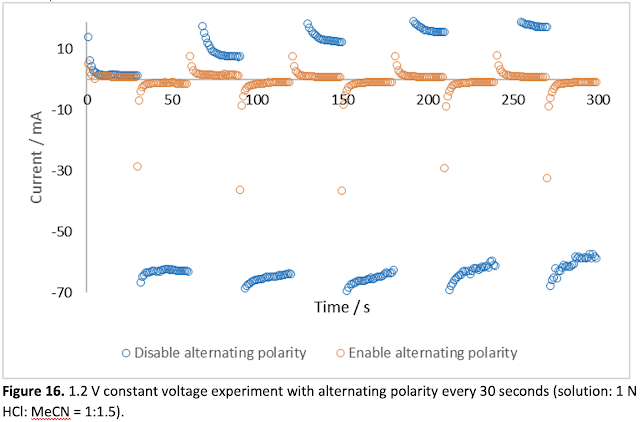 Accordingly, we have concluded that, alongside the existing function, an updated software version (0.0.026 / 0.0.027) will enable ElectraSyn 2.0 to perform a constant voltage reaction with reference electrode under alternating polarity conditions.

We thank Dr. Marc Reid, his colleagues, and all our users for supporting ElectraSyn 2.0 and providing valuable feedback.