Radicals can DELiver for DEL

You may have noticed that our work on sp3-sp3C-C coupling for DNA encoded library (DEL) synthesis was deposited on Chemrxiv about two months ago. Recently, we found a nice home for this DEL-related work. I am not talking about the keyboard.

It’s out in PNAS today. While the paper offered a detailed account of mechanistic work by the Blackmond lab alongside an assortment of working substrates, I would like to share with you some behind-the-scene stories of this “non-traditional” project.


In a nutshell, this project can be likened to our effort to “radicalize” DEL synthesis. It all started in 2017 when our long-time industrial collaborator, Pfizer, approached us for ideas on new reaction manifolds for DEL synthesis. We learned about the stringent requirements for DEL prior to putting together a substantive proposal:
First, a "DEL-able" reaction requires, inter alia, reagents and conditions which are compatible with DNA. We had our in-house biology expert do a group meeting on DNA chemistry – a universal verdict from his presentation appears to be that, despite thousands of years of revolution, our DNA is chemically fragile – a vast majority of reagents under the sun (or even the sun itself) can cause troubles. Second, a DEL reaction requires a solvent system comprising >20% water. While life subsists on water, to most organic reactions, irrigation breeds irreversible damages: 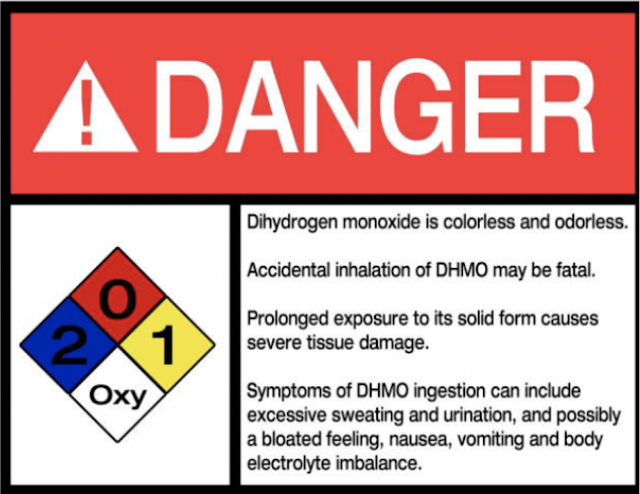 Third, the reaction temperature must not exceed 90 oC and the reaction pH must stay within the comfort zone of 4-14. Most dauntingly, the reaction concentration must be below 1mM.
After some deliberations, we decided that perhaps radical reactions are well suited for DEL – after all, radicals are generally moisture insensitive and chemoselective (over the years we have run such reactions in many unconventional solvents). Toward this end, our lab has a long-standing interest in the radical decarboxylative cross-coupling reactions of carboxylic acids using nickel catalysis. Methods have been developed to forge carbon-carbon and carbon-heteroatom bonds. More promisingly, these reactions were compatible with solid-phase peptide synthesis. To a chemist like me, all biomolecules are perhaps equal (thus, there is a likelihood our technology will translate from peptide to DNA). (I soon learned that some biomolecules were more equal than others…). Pfizer showed strong interest in this project as it could offer access to the much desired sp3-rich space, a promised-land in the realm of DEL chemistry. Thus, the project was initiated…
Since I have given a group meeting on “Reactions in the Presence of Water” in June of 2016, I was perhaps considered a more “hydrophilic” individual than any other lab members. Thus, I was charged with this project. Maybe destiny brought me here.
It didn’t take me too long to settle on the decarboxylative Giese reaction as the focus of the study. We started to evaluate the feasibility on small molecules at first. I was soon baffled by a seemingly trivial problem: how do I determine product yields when my reaction is 1 mM in water? NMR analysis regularly gave >100% yields (who needs conservation of mass/energy, right?). In a desperate move, I even tried to isolate the products, once obtaining 11 mg of products out of hundreds of milliliters of solvents!
Jason came to the rescue here -- he built up the ‘Automated Synthesis Facility’ here at Scripps in 2017 and brought the analysis up to speed. I can easily get 20 reactions analyzed within an hour. More importantly, no workup was needed at all. To cheer my spirit even further, I was joined by Helena Lundberg, a really talented postdoc from the Blackmond lab. She provided extensive mechanistic insights through her kinetic studies that also provide a general protocol for converting organic reactions into DEL-compatible counterparts. With her help, we were able to get >70% yield which set the stage for evaluating functional group tolerance as well as translating to on-DNA synthesis.
Then I was joined by another two talented chemists, Shota and Pedro, both of whom hail from a “hydrophilic” locale (Japan and La Laguna, Spain). With their help, we were able to evaluate all sorts of functional groups (thanks to Pfizer team providing suggestions and carboxylic acids) – gratifyingly, most of them were tolerated under the reaction conditions.

However, our happiness was “ephemeral”. Our mock-DEL conditions were found to be incompatible with DNA molecules. For 8 months, we begrudgingly awaited the advent of another superhero. This time round, it was Dr. Stephen Brown, a brilliant Pfizer scientist, who discovered that by diluting the reaction by yet another order of magnitude and using DMSO as a co-solvent, the reaction worked nicely on DNA, providing the product in 40% yield. Starting from this, I was able to optimize further and demonstrate this transformation with 22 on-DNA examples.
As a historically organic synthesis-based lab, we are not equipped with any instrumentation for DNA synthesis. Thus, we are indebted to the generosity of other TSRI labs (e.g., the Romesberg lab) and Pfizer (both La Jolla and Groton) for helping us with much of the analysis.  We are also grateful to LGC for a great deal on the DNA headpiece starting materials. Our creativity also evolved during the study. For reactions that require inert atmosphere, we put the Eppendorf into a test tube and exchanged with argon. Since a stir bar is usually not an option in DEL synthesis, we bound the Eppendorf to a rotavapor and let them rotate together (inspired by Lara). For reactions that require heating, we wrap the Eppendorf with parafilm and aluminum foil, bind with a sinker and put them together into an oil bath (mimic the role of thermocycler). Fortunately, Phil didn’t ask me to demonstrate a gram-scale synthesis this time.

Doing DNA chemistry in a synthetic lab can be rather painful, especially at the very beginning. We constantly change our substrate in order to better mimic DNA functionalities as well as obtain good LC separation [LC traces could be unbelievably messy when we were using super stoichiometric reagents (>100 eq is very common in DEL)]. Setup, analysis, purification… each step seems to pose problems. Moreover, on such small scales, it is challenging to diagnose problems, let alone solve them. During the dark times, I was jealous of my colleagues – as they are able to “concentrate” on their hydrophobic transformations while I constantly battled the consequences of “low concentration” and water. Nevertheless, ultimately, I find this experience greatly fulfilling and the final protocol was reproducible and reliable. It is always a satisfying learning experience when working with a team of dedicated and talented scientists. In this case, I particularly relished collaborating with a number of brilliant people withvarying areas of expertise. The science shown in this recent publication is the result of a collaboration among Baran lab, Blackmond lab, Scripps Automated Synthesis Facility, Pfizer La Jolla and Pfizer Groton. I would like to express my heart-felt gratitude to all of them!

Lastly, I hope our DNA chemistry would one day translate into an NDA of your research program… (Special thanks to Dr. Ming Yan for linguistic suggestions and contributing to the jokes here.)
Feel free to let us know if there are any questions you may have! Thanks for reading.

Pyrone Diterpenoids: A Not-So-Boring Journey 4 Years in the Making

Today, our work on the synthesis of natural products from alpha-pyrone diterpene family is out in JACS. While the paper details our final approach to these compounds, I would like to share the behind the scenes journey towards these molecules. Some of you may recognize that this topic was presented by Phil during his DOC lecture last month.

In the summer of 2014, our long time industrial collaborators  at LEO Pharma asked our lab to synthesize subglutinols A and B due to their reported immunosuppressive properties and potential as therapeutics. At that time, Kevin (postdoc in the lab and now a medicinal chemist at Eli Lilly) and I were charged with accessing these natural products in a concise and divergent manner. Assuming that Suzuki cross-couplings are always supposed to work (perhaps naively), we wanted to append the pyrone to the terpene skeleton via a cross-coupling strategy. To cut a long story short, after 8 months of starting the project (see SI for failures to this intermediate), we prepared the substrate to try our key step. However, it won’t be a good story (only in hindsight) without a catastrophe. Although “borono-subglutinol” could be cross-coupled with simple coupling partners like bromobenzene, the coupling never worked with the required bromo-pyrone, and we spent another 9 months trying to install the pyrone. However, all our efforts with met with spectacular failure.

With the project in shambles, we decided to come up with a boring route (as Phil calls it) to prepare the natural product so that LEO could do the biological studies. We could in fact synthesize subglutinol A in 25 steps (detailed in the SI), and the natural product was delivered to LEO. Based on our “boring” route, we identified the following key limitations; (1) It took 5 steps to install 5 out of the 6 stereocenters on the molecule (including the core and subglutinol A THF ring) but 16 steps to install 1 stereocenter (C4 stereochemistry) as well as the pyrone; (2) While we had a way to access both subglutinol A and B THF rings selectively, the divergence occurred fairly early on in the sequence, and we wanted to delay this as much as possible; (3) We had a material throughput problem – the polyene cyclization required 3 grams of Mn(OAc)3and 1 gram of Cu(OAc)2for every gram of SM which resulted in purification nightmares!! 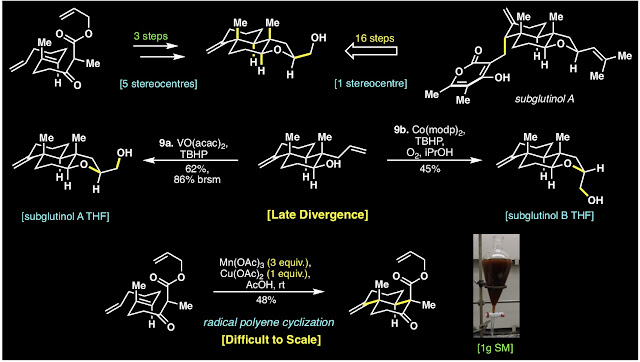 I won’t go into detail about how we ended up solving each of these problems ,but the key highlights are:
(1)For the polyene cyclization, electrochemistry allowed us to reoxidize Mn(II) to Mn(III) during the course of the reaction, making the reaction catalytic in Mn salts and resulting in a much simpler workup procedure.
(2)To fix the other problems, we came up with a “revised retrosynthesis”. So far, the sterically hindered C18 methyl group and diortho substituted pyrone had been the bane of my existence. We decided to kill two birds with one stone via a more radical disconnection. Disconnecting C4–C20 bond would allow us to use the sterics of C18 methyl group to our advantage (blocking the top face of the molecule). With regards to the late divergence to access both subglutinols A and B, we believed that under radical cross-coupling conditions, the C12 stereochemistry could be inverted through a stereoablative radical intermediate from a more sterically hindered cis THF ring of subglutinol A to a more stable trans THF ring of subglutinol B. However, the core of the molecule that we could easily access had an extra carbon at both the C12 and C4 position. One way to burn off a carbon to generate an alkyl radical was to perform a decarboxylation transform! This was helped by the fact that our lab was working decarboxylation cross-couplings at the same time and therefore, we thought this would be a good opportunity to develop decarboxylative Giese and alkenylation transformations.

To cut a long story short, we went on to develop a general decarboxylative Giese and alkenylation transformations of redox-active esters, and they could be implemented to the synthesis of subglutinols A and B. Eventually, we could also demonstrate our “revised retrosynthesis template” to prepare sesquicillin A and finish the first total synthesis of higginsianin A. We considered this a less-boring route, but not as exciting as this kind of boring. 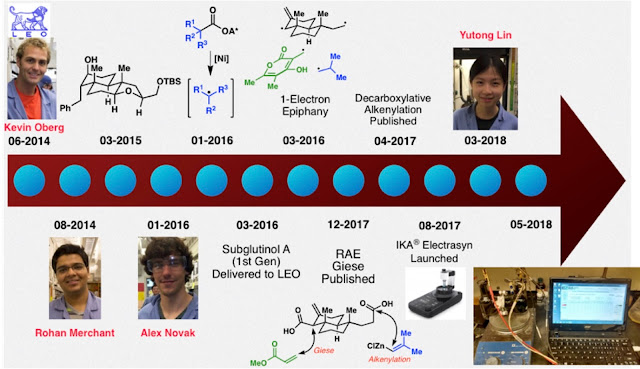 I have been on this project for the past 4 years, and while there have been a lot of ups and downs (definitely more downs), we did eventually reach our desitination! I just want to give a shout out to two extremely talented visiting students, Alex Novak and Yutong Lin, as well as thank our collaborators at LEO for their patience. If you have any questions about the chemistry or natural products themselves, please let us know! Thanks for reading!!