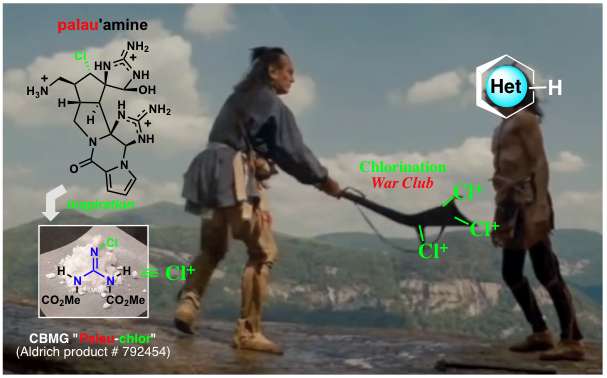 Palau'chlor: A Practical and Reactive Chlorinating Reagent. Another paper, another blog post.

Ever wonder what kind of name is palau’amine?
Well yes… this alkaloid was isolated from a sea sponge native to the island nation of Palau.

But after a few minutes of googling I came across the word La’au palau or just palau and according to a Hawaiian dictionary is a type of weapon or “war club”.

And upon further inspection you may convince yourself of how the two guanidiniums resemblance jagged shark teeth or something close to that nature.

Working on making these polar natural products has always been a purification nightmare. Rotovaping water/acetonitrile hplc fractions on the daily definitely has to account for the majority of butt-kicking I (and many others) have endured from these nitrogen-war clubs, especially when trying to make more than just a few milligrams. I am still haunted by the days my co-workers gave me the stink eye for hogging rotovaps for 8+ hours and even resorting to unconventional air blow-down techniques (important) only to be made fun of L (ty dane).

Fortunately sticking to nasty polar molecules most likely means not many chemist have had the chance to explore their reactivity and stability and sometimes the butt-kicking pays off!

This story started like most other stories in Barnowl. PSB wanting to make natural products on [gram-scale]. In the process of optimizing the first generation route to key chlorospiroaminoketone 3, some key reactions were discovered. Of these, one was a chlorospirocyclization using this crazy cocktail of tBuOCl, TfNH2 then TFA, DMP. How did we get to this mix? Well TFA and DMP did the oxidation but what about TfNH2? So here is a lesson that I learned about “working dirty”. Unlike the post-doc I was working with, I purified every reaction as pure as I could so in case something didn’t work in the subsequent step I had one less variable to troubleshoot due to potential impurities… well this result changed all that. Guanidination of the corresponding primary amine using N,N′-di-Boc-N′′-triflylguanidine (Goodman’s reagent) furnished 1. Eager to push forward with very little material, the guanidylation reaction was essentially used crude for the next step… working with impure material has its perks.

To be honest we didn’t know what the heck TfNH2 was doing and we didn’t spend too much time thinking about it. All we knew was that it made the reaction cleaner looking and that it made us feel good. Nevertheless we stuck to the old “if it aint broke don’t fix it” mentality and got the JACS communication out the door. After letting all the smoke clear, we found what was really going on and realized that TfNH2 serve a good purpose after all. It’s proposed that tBuOCl reacts to give intermediate 6 and this is the actual chlorination species. After realizing this we decided to see if simple BisBocGuanidine could do the trick and found out that indeed it could but not as effectively…

It turns out TfNH2 was acting as a reductant for over-chlorinated species (such as chlorination of 2 or 3). In the model system [simple allylic guanidine: 1-(cyclopent-1-en-1-ylmethyl)guanidine)] this wasn’t a big deal but on the real system (1), the addition of TfNH2 was (as our gut feeling told us) essential (presumably due to alcohol or ketone reactivity toward over-chlorinated products). 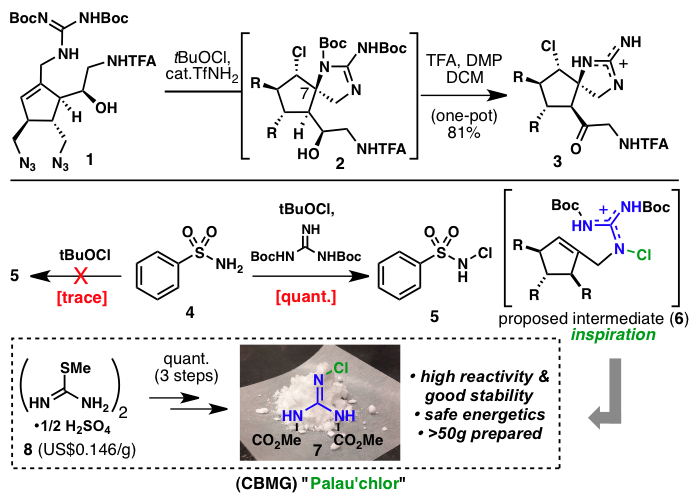 So there you have it. Now that you know the background of this story lets fast forward some things… so we can chlorinate olefins. Cool!! Sorry PSB says boring. What we really need to focus is on heterocycles. After some side chain optimization we decided on reagent 7 (chlorobis(methoxycarbonyl)guanidine or CBMG aka “palau’chlor”). This guy was like NCS on steroids but without the nasty side effects that usually follow the use of such performance enhancing agents. So what do I mean by this?? If you look at substrates 10 and imidazo[1,2,-a]pyrazine (these two show representative contrast) you can see that most mild reagent conditions (practical) fail to give product for 10, while more aggressive reagents (reactive) decompose imidazo[1,2,-a]pyrazine. CBMG was the best of both worlds. You can read the paper to see the substrate scope as well as rate differences among other things. 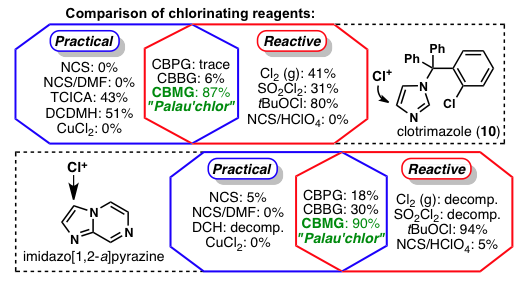 The two points I will highlight in this blog post are what you guys will probably care about the most: 1.) purification 2.) solubility (solvent effects).

So who likes purifying? Not me (at least not anymore. Lol). Unless its necessary, really I shoot to get away with a work up alone … in cases where I can’t? Well I say the heck with the work up!! Just concentrate and load the reaction directly on silica gel (especially on large scale).

The solubility of the des-chloro 7 is poor in just about any solvent but worst in acetonitrile. All reactions typically start out clear (completely soluble in CHCl3) and end up very opaque/cloudy with fine white precipitate. Always you can filter this precipitate out and makes the work up or column easier but in cases where the reaction goes to full conversion (using 1.1 equiv reagent), this feature is awesome. In the [gram-scale] example below, the unstable chloroindole 22 was quickly purified by just simple filtration and isolated in quantitative yield. 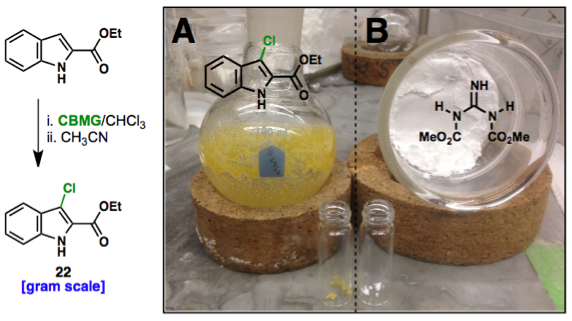 Another interesting point is solvent effects. As you can see from the above table, solvent can have a dramatic effect on chlorination reactivity. For example, reactions using NCS/CHCl3 system had a dramatic effect when changing to NCS/CH3CN (entry 1B vs entry 2B) but overall it was found that this was not always the case as there were examples using NCS (compared to CBMG/CHCl3) that showed no improvement in yields (entries 9B-12B) regardless of solvent. 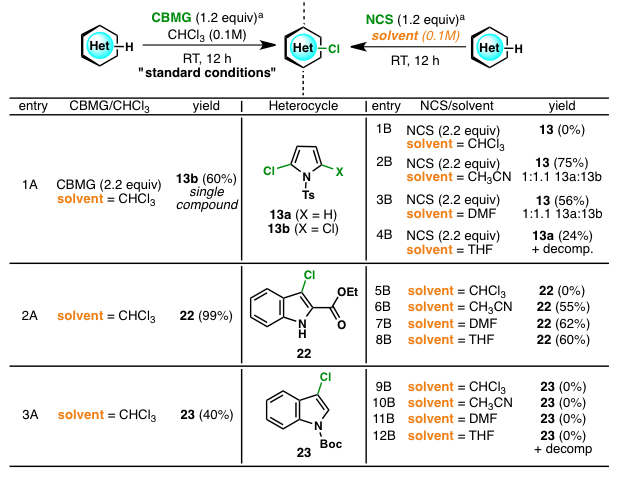 By the way it is of note that a substantial amount of effort went into compiling the final substrate table. We wanted to make sure that CBMG was indeed superior in reactivity to NCS (or other chlorinating agents) and this effect was not just a solubility effect. In some cases we selected conditions that worked best for NCS to compare against CBMG (using identical conditions). Therefore, a lot of screening took place. But at the end of the day this tedious work of “optimizing the enemy” was seen necessary to prove CBMG was having a real effect.

So palau’chlor ehy?? Lol.
Well this originated from PSB’s recent trip at the Dallas ACS. During his talk he used the name palau’chlor and soon after emails started coming in asking for palau’chlor… I had to admit it was catchy. Reminds me of selectfluor.

How about bromination? fluorination?? Yes we are still trying.
PS. That movie is awesome.