Initially, we figured the easiest method to directly functionalize a heterocycle would be through a Minisci reaction. So, we tried it but it didn’t work.

We then scoured the literature for other methods to achieve this transformation and found a paper that showed Barton esters can be trapped by heterocycles (Tetrahedron Lett. 1986, 27, 6337–6338): 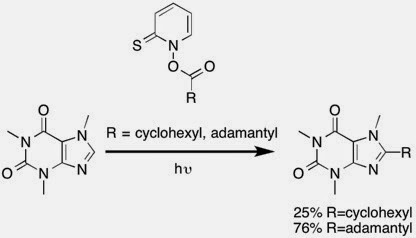 We tried this reaction with commercially available trifluoromethylcyclopropyl carboxylic acid but this led to <1% desired product.  However, we also obtained a byproduct that we identified as the decarboxylative rearrangement of the Barton ester:

This was a big AHA! moment for us because we knew that we could easily convert this pyridyl sulfide intermediate to a sulfinate salt which we can subsequently use to functionalize heterocycles. Thus we established a new mission: 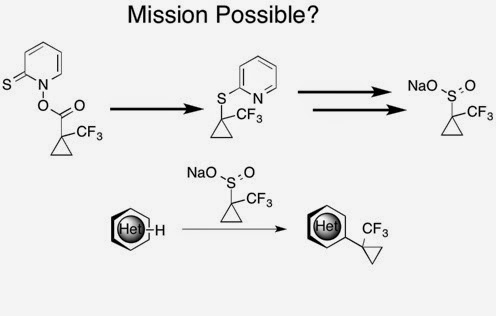 Here is the actual email correspondence to Phil:

The data is attached. I think we have our product. The aliphatic region of the purified compound doesn't integrate well but the shifts are in the correct region (perhaps minor impurities still present) and the imidazole. I've attached the TLC/prep plate photos (100% EtOAc) - the top spot is what I expected. The LC-MS is spot on and there is only one peak in the 19F NMR. 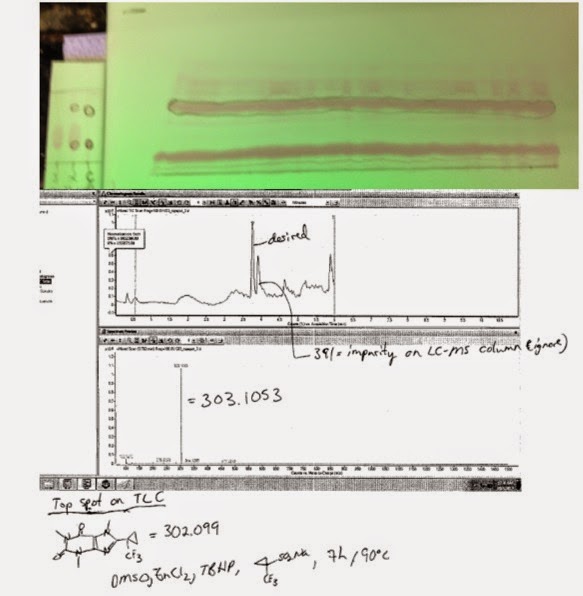 After several months of optimization, we identified diethyl carbonate/water mixture as the optimal medium in which to conduct the C-H functionalization and which allowed us to eliminate any additives from the reaction mixture.

At the same time, we found that our decarboxylative rearrangement conditions were very general. So, with the consultation of Mike Collins and Dr. Aaron Burns (from Pfizer) we decided to make more salts that we felt would be valuable in the medicinal chemistry arena. Also, we commercialized six of these salts through our collaboration with Sigma Aldrich.

Thus, we were able to construct two tables; a table of new sulfinates and a table that shows the reactivity of some of them. The tables can be viewed at:

The only thing that I’m disappointed about is that we didn’t get a cool tag line in the Angewandte ASAP’s…Lol!

THANKS EVERYONE: I would like to thank all of the team members who really put their heart and soul into this project. Cecil Eprile who was an undergraduate intern who was courageous enough to join me at the onset and made major contributions during the early stages,  Dr. Shuhei Kwamura who is one of the most talented scientists that I’ve ever worked with, Dr. Klement Foo who graciously offered his valuable time and expertise to the project, Jason Ge who is an extremely talented high school student and soon to be a Harvard freshman, Mike Collins and Dr. Aaron Burns from Pfizer, and Chris Thomas and Troy Ryba from Aldrich. 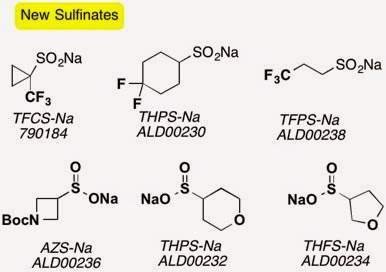