When we look back at some of our lab’s terpene syntheses using a “two-phase” approach, it becomes abundantly clear that one oxidation reaction is used more than anything else: the allylic C–H oxidation. What isn’t obvious just by reading, though, is how unappealing these reactions actually are to perform. In the case of taxayunnanine D, our synthesis required 30 equivalents of our unique chromium (V) reagent, while a challenging oxidation en route to phorbol required 100 equivalents of CrO3! While these reagents served their purpose, we knew that the cost and toxicity associated with them would unquestionably preclude scaling up of these syntheses.

This challenge presented us a unique opportunity to design a new system for allylic oxidation with the goal of a scalable and sustainable solution as reported today in Nature. Having explored some anodic oxidations a couple of years ago in both methodology and synthesis, the idea of allylic oxidation using electrochemistry was pretty appealing. As is almost always the case, someone had a similar idea during the Cold War – unfortunately, conditions developed back then were not general and led to poor conversions and yields in the reactions. We theorized that developing a variant of N-hydroxyphthalimide bearing electron-withdrawing groups would improve the reaction, and we found that using tetrachloro N-hydroxyphthalimide (Cl4NHPI) as a catalyst in the presence of a co-oxidant such at tBuOOH led to dramatically improved yields in these reactions.


One thing that we don’t really go into in the paper, is what it took to get these reactions to work from an engineering perspective. Initially we used graphite rod electrodes, these are pretty much big things of pencil lead that we purchase from Mcmaster-Carr (an online supplier of hardware stuff). At some point during the optimization process, we realized that while we were able to get beautiful conversion by crude NMR, the mass recovery for the reactions was often extremely low. After a ton of frustration, we reasoned that the lost mass was being absorbed into the graphite electrodes! We tried extensive washing of the electrodes, even resorting to soxhlet extraction for days, but these procedures were cumbersome and even with the extractions, we never were able to account for all of the material. After some more experimentation, we began to look at alternative electrode materials. While there are many examples of preparative organic electrochemistry using gold or platinum electrodes, these are quite expensive and we reasoned that even if Phil would let us buy them (he probably wouldn’t) their high cost would discourage any other labs or process groups from using our methodology. Glassy carbon, which is also often used as an electrode material, was also cost prohibitive. After searching through the chemical literature as well as scouring through random materials suppliers on the internet, we discovered RVC foam.
This stuff is pretty much an inexpensive source of glassy carbon, and is sold in sheets of various “pores per inch”. Since glassy carbon is impermeable to gasses and liquids, we figured that this should improve the yield of our oxidation and not suck up material into the electrodes. It took us quite some time from getting our first order of RVC foam delivered, to having our optimized electrochemical setup. The key thing we found was that for the reaction to proceed efficiently, we needed to maximize electrode surface area. Eventually we came to the setup we describe in the paper (and have laid out in detail in the Supporting Information). In summary, to put together the cell, we take a brick of RVC foam (100 ppi, costs ~$20 for a sheet from K.R. Reynolds co. which can make >10 electrodes) carve out two half-cylinder electrodes using a razor blade, and then solder connections to the top using stainless steel wire. The electrodes are placed in the cell (a test tube) and to keep the electrodes from touching we put a glass slide between them. 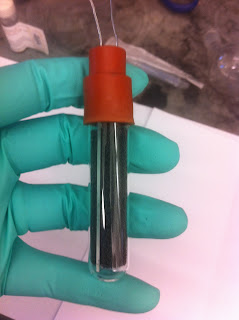 Admittedly, this setup is a little crude, and we are sure that a group with more engineering resources at their disposal could fabricate a prettier and perhaps more efficient device to carry out this reaction However, we are not an engineering group, and really wanted to develop a way to run this reaction using stuff that was inexpensive, and for the most part can be found in any synthetic organic chemistry lab. With optimized conditions in hand, we went on to explore the substrate scope. Methodologists like simple substrates, so we did those to make them happy. One thing we want to highlight is that the reaction tolerates tertiary allylic alcohols, and gives none of the allylic transposition product that is usually observed when oxidizing these substrates using traditional (chromium) methods.


What we were really interested in, however, were natural products. We bought, isolated, and synthesized as many terpenes as we could in as short a time as we could, hoping to oxidize them to enone containing terpenoids. We were able to oxidize several different terpene skeletons bearing a variety of olefin substitution patterns, electronic characteristics, and oxidation barcodes. We even found that the conditions were mild and selective enough for a fully deprotected glycosylated steroid (try that with chromium!). One of our favorite substrates was the oxidation of valencene to nootkatone (compound number 5) that had been previously reported using 15 equivalents of chromium! For those of you who have never been exposed to nootkatone, it is the primary fragrance component of grapefruit aroma, so anytime we would make it the smell of delicious grapefruit would permeate throughout the lab. We were also excited by this substrate since recently nootkatone has recently been show to be quite an effective mosquito repellant and a San Diego based company that produces nootkatone and valencene via fermentation had recently been purchased for $ 59 million!


At some point during this project, we were approached by one of our collaborators, Asymchem (a CMO in Tianjin, China) who are interested in developing a platform to conduct reactions using electrochemical methods in order to decrease cost and environmental footprint. We gave them our procedures and some instruction of how they might carry out this transformation on a larger scale. In a few weeks time they were able to get this reaction to work 100 g scale! Perhaps equally cool was their crazy simple reaction setup, which consisted of two graphite plates submerged in an eight-liter beaker, contained in a bucket filled with ice! At the time we were trying to put the paper together Phil wanted to up the scale even more (can we do a mole?!?!), but the only limit (at the time) was the fact that the potentiostat asymchem had only went up to 1 A. In theory if a process group wanted to there is no limit to the scale of this reaction.
It is easy to say that a reaction is “green” but we wanted to really show how much of an improvement our allylic oxidation was compared to the current methods that are used to run allylic oxidations on scale. Since we had been working with BMS process chem to use this reaction for some of their early-stage intermediates (Thanks Martin and Ke!), they provided some interesting metrics comparing our method for the oxidation of dehydroepiandrosterone acetate to two other literature examples that used chromium and ruthenium. The Process greenness score (PGS) is a rating used by BMS (other process companies use similar metrics) to evaluate the environmental impact of a reaction, taking into account the amount of waste the reaction generates (including workup) and the overall efficiency of the reaction. A higher % PGS indicates a “greener” reaction. The electrochemical reaction scores 56% vs. 32 and 37% for the chromium and ruthenium-based oxidations. As stated in the paper the PGS associated with our oxidation is in the range of standard amide bond forming reactions, as well as palladium-catalyzed coupling reactions. It is also worth noting that the PGS does not take into account the cost of disposal or the toxicity of the reagents, which means that compared to the chromium and ruthenium oxidations, our electrochemical reaction is even more of an improvement.
Overall this was a really exciting project to work on. Neither of us thought we would end up doing electrochemistry in the Baran lab, and although at the beginning it felt way outside of our comfort zone and chemical expertise, it is an interesting experience to do something completely different. One of the coolest parts of the whole thing was actually developing something that is scalable and sustainable that people actually might use. Phil had been alluding to this project during some of his recent ACS talks, and we have already been contacted by a number of process groups in the fragrance industry wanting to apply this chemistry to the manufacturing of a few chemicals. While electrochemistry might seem daunting, once you get over the initial learning curve there are a lot of really cool and practical applications, and hopefully you will see some more out of our lab in the future. We hope that other groups (academic or industrial) will begin to embrace this methodology, and electrochemistry in general, as an enabling tool for sustainably carrying out redox reactions in the lab, especially on scale.

-Evan and Brandon
Posted by BaranLab at 9:57 AM