From One Acid to Another

Our recent work on decarboxylative borylation was published in Science today! Since Science’s new online research article format has allowed us to include many details in the paper as well as the supplementary information, I will avoid repeating what has been published online. Instead, I would like to share some behind-the-scene stories.
This project originated during a brainstorming session in Phil’s office in last May. Phil’s eyes were beaming with excitement, describing the prospect of converting alkyl carboxylic acids into alkyl boronates. I thought it was a workable idea but failed to comprehend the boss man’s enthusiasm—we could turn a “C” into a “B” but I would always want an “A”. Probably sensing my indifference, Phil told me to learn about Velcade where the boronic acid served as a pharmacophore. I was mesmerized by the mechanism of action; I was more thrilled by the fact that more than 15% of clinical drugs, such as chlorambucil, indomethacin and Liptor, contain the carboxylate moiety,. Could we possibly develop a method to convert all these bioactive carboxylic acids into their bioisosteric boron congeners? I was intrigued and embarked on the project.
The initial condition screening took several painstaking months. To make a long tough story short (see our 400+page SI), I started the optimization from a secondary RAE, and it was found that the preparation of MeLi and B2pin2 ate-complex, and the addition of MgBr2 etherate were crucial. The pre-mixed MeLi and B2pin2 provided an activated ate-complex and allowed the coupling reaction to occur under mild conditions. The addition of MgBr2 etherate was thought to promote the transmetallation of boronate species onto the Ni center. However, when I applied the optimized reaction conditions to the primary RAEs, the major products were carboxylic acids (hydrolysis) and decarboxylative dimerization products. Interestingly, it was found that changing the ligand from di-tBubipy to di-MeObipy could increase the yield. We hypothesized (thanks to Pep for the insightful discussion) that the electron-rich Ni/ligand complex could facilitate the single electron reduction of NHPI as well as the combination of the primary radical with the Ni center. However, further increasing the electron density of the ligand didn’t help the reaction. At this point, I was glad that Jie joined me in the struggle and he found that the addition of DMF increased the yield further. Building on this finding, he came up with a set of conditions for tertiary RAEs. 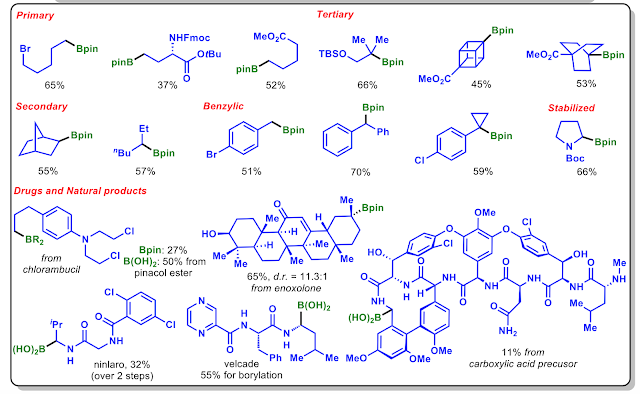 Admittedly, Miyaura borylation (such as Fu’s elegant work) based on alkyl halides provides access to some of our targeted boronates as well—but we’re most interested in complex substrates such as amino acids whereby the corresponding halides are not viable coupling partners. It was found that the decarboxylative borylation also worked well on mono-Boc protected amino acids; however, since the electron-deficient nature of the boron atom enabled it to form a three-membered ring with its neighbor electron-rich nitrogen atom, such an adduct was prone to undergo C-B bond cleavage on silica gel and I couldn’t isolate the desired product. Lisa also found the same problem with α-oxy carboxylic acids. In an almost illogical move, instead of going back to simpler substrates, we started probing more challenging dipeptides. To our utter surprise, the borylation of the dipeptide worked very well; we were able to successfully synthesize two FDA approved drugs, velcade and ninlaro, both from simple native peptides!
After learning about our little success, Phil avidly asked me to do the borylation on vancomycin. After checking the calender to make sure that date was not April 1 and spending the next half an hour drawing out the structure of our desired borono-vancomycin, I approached Dr. Okano (Boger lab) who not only provided me with materials, but also offered lots of insights. To our delight, we were able to perform the borylation successfully on a vancomycin derivative. Although this transformation did not bring about an increase in antibiotic activity, we were excited by the reaction’s chemoselectivity.
Overall, primary (1º), secondary (2º), tertiary (3º), benzylic (including 1º, 2º, 3º), stabilized or non-stabilized, carboxylic acids on different ring systems, complex drugs (heteroatom-containing) and natural products could all be transformed to their boronic ester form smoothly using this reaction. Lisa and Jie also found that tertiary and secondary boronate esters also could be prepared from carboxylic acids directly when RAEs were generated in situ. The reaction conditions do differ depending on the nature of the substrates, but we provided a Guide for Selecting Reaction Conditions in our SI (page S31) to help the chemists who would be interested in this chemistry. The reaction setup is not complicated (done in three stages, including making the catalyst/ligand stock solution, preparation of the MeLi and B2pin2 ate-complex, and mixing them together with RAEs and MgBr2 etherate). The following video shows that Tony, our talented high school intern and a member of our team, can independently handle the decarboxylative borylation. To find out exactly who Tony is and see this simple reaction in action, see the video:

We were fairly content with the reaction scope but one question eluded us: can we use this reaction to exploit the untapped medicinal potential of boronic acids? At that moment, Phil had a conversation with “His Excellency” President Peter Schultz about our transformation. After a few days, Dr. Arnab Chatterjee in Calibr contacted us, enquring if we could prepare for them the following three boronic acids. The corresponding trifluoromethyl ketones are human neutrophil elastase inhibitors that have been tested in Phase II clinic trial for lung diseases; theoretically, the replacement of trifluoromethyl ketone with boronic acid could enhance the activity—however, preparations of these boronic acids are quite challenging by conventional means.
Jie synthesized the first two molecules mCBK 319 and mCBK320 using our decarboxylative borylation in a few days, and the products were provided as single diastereomers. The initial hElastase inhibitory evaluation (IC50) showed that both mCBK 319 and mCBK 320 were more potent than their trifluoromethyl ketone forms, and the native peptide did not show any activity at all. With this result, we wrapped up the study and submitted our report to Science. It was only later when Calibr and Jie found the third molecule mCBK 323 was the most powerful (IC50 = 15 pM, Ki = 3.7 pM). The reviews were encouraging; nevertheless, they also suggested that the elastase studies may be published in a separate account as our current disclosure was too preliminary. To me, this wasn’t a bad news at all—after all, I could end up getting two publications from this project. However, Phil always values quality way more than quantity. The editor, Dr Jake Yeston, was also really accommodating and offered a second option that we expand the study into an online research article. Phil opted for this without any hesitation. Our colleagues from Calibr: Dr. Shan Yu, Dr. Kristen Johnson and Dr. Arnab Chatterjee worked tirelessly to complete a litany of additional biological assays in the narrow window of several weeks.
We are also glad to report that mCBK 323 can now be accessed on gram scales; with abundant material supplies, in vivo biological studies are underway.
Our decarboxylative borylation is not without limitations. They are highlighted in the scheme below: 1) occasionally, the purification could be a problem, both due to the excess B2pin2 and the low boiling point of some simple pinacol boronate esters; 2) thioethers and thioesters were not well tolerated and led to low yields.

Finally, I wanted to mention that in keeping with lab tradition, the Supporting Information is extensive. Phil told us that he wanted this document to be timeless so that if we all vanished in an earthquake or simply become too old to remember what we did, all the questions people may have and all the data needed to reproduce the reaction would be present for years to come.

As always, if there are any questions please feel free to post them here or email us!


Chao and Borylation Team.
Posted by BaranLab at 10:49 AM