Last month the team at Eisai responsible for the commercial scale synthesis of Halaven (easily the most complex drug molecule produced entirely by chemical synthesis) published a series of papers (theres three links there) detailing the development from the medchem route to process.  While these papers are a must read from the standpoint of using total synthesis to solve a supply need, this post is only peripherally related.

Early on in the synthesis of one of the pieces of the western half of the molecule the group does a chromatographic resolution of a racemic alcohol using 'simulated moving bed chromatography'. 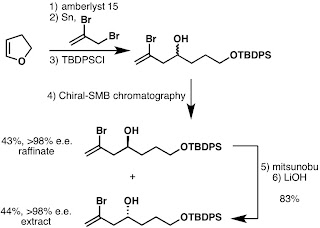 I found the chrial chromatography on such a massive scale quite interesting (perhaps as a result of my inexperience with process chemistry).  If you're anything like me you just spent the last 3 days doing a lipase resolution with a mediocre E value and a chiral column seems pretty attractive.  It gets even better when you read a bit and realize that SMB chromatography is done in a continuous fashion where the mixture is continually pumped into the system and and the two components are separated and pumped off side by side.  Not only does that make it much more operationally attractive than batch chromatography but you save a lot of chiral stationary phase. 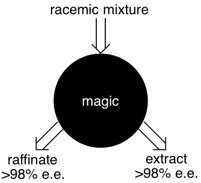 The literature on SMB chromatography can be somewhat unapproachable and full of ridiculous schematics, but there is a wonderful review that explains everything kindergarden style with cats and turtles before delving into the scary math we all got into synthesis to escape. 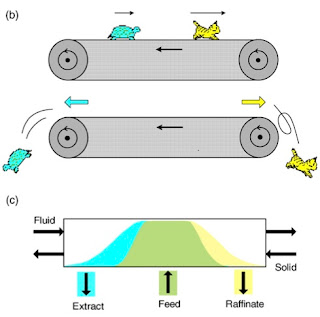 The basic idea behind true moving bed chromatography is to move the stationary phase (ergo moving bed) in the opposite direction of the mobile phase to attain continuous separation.  In the case of the turtle and the cat running on a moving track: if the cat is running faster than the turtle and the track is moving in the opposite direction at a speed in between that of the cat and the turtle, then the turtle will have a net backwards motion and the cat will have a net forwards motion.  In the hypothetical example, the cat falls off the front end and the turtle falls off the back end.  In the chromatography case the less retained compound will move forwards and be siphoned off as the raffinate while the more retained compound will move backwards and be siphoned off as the extract.

So, "how do you move your stationary phase?" you ask.  Well...you don't.  Solids don't behave well and are just generally uncooperative when it comes to physical manipulation.  As a result moving bed chromatography was just a cool idea until Broughton and Gerhold from UOP introduced simulated moving bed (SMB) chromatography. 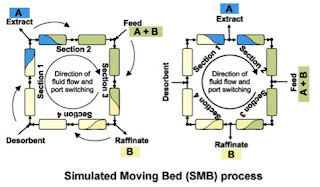 Instead of moving the stationary phase, these clever gents had the idea of rotating which ports are used for injecting and removing material.  If you rotate them in the same direction as fluid flow you can simulate the movement of the stationary phase.  The system uses a series of typical stationary chromatography columns separated by valves and the position of the inlets and outlets is periodically rotated.  If you consider the perspective of the feed valve (think relativity) in the diagram above it appears that the stationary phase is moving counterclockwise while the fluid flow is clockwise.  By optimizing the number of columns and timing of port switching a moving bed is effectively simulated and continuous separations can be performed.

To give you an idea of it's utility SMB is used to purify fructose on the order of several tons per day with a single unit.  It's super useful for kilogram scale chiral separations and is just generally awesome.  It only works well on binary mixtures so it won't likely replace batch chromatography as the go to method for compound purifications.  Still, who's going to look at this little guy the same again... 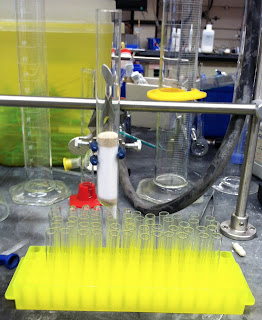