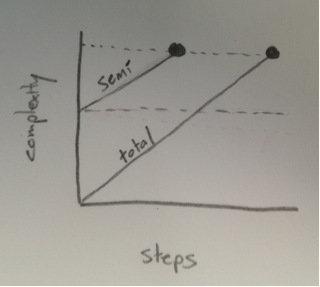 Taken from a group meeting presentation on semisynthesis.


One of the perks of being in the Baran lab is the weekly Saturday morning group meeting.  A free breakfast is accompanied by a short lit, long lit, and seemingly impossible mechanism problem to remind everyone of his or her incomplete (or inadequate) grasp of the literature.  New topics are not easy to come by owing to the fact that we have over ten years of archived presentations.  When my turn for long lit presentation arrived, Phil recommended the topic of semisynthesis.  Phil said, “Go for it, and take it any direction you want.”  Initially it seemed like a rather boring presentation, until a grad student recommended I take a look at a book by Tse-Lock Ho titled “Enantioselective Syntheses: Natural Products from Chiral Terpenes”.  If Ho would have been at Scripps it might have been called “Classics in Semisynthesis” and the pages illustrated with every color of the rainbow.  I decided to turn this into a game of “Find the Terpene”.   After a brief look at a natural product, the object is to identify the original terpene from which it came.  In conclusion, people have torn these cheap terpenes to pieces to arrive at nearly any sized ring or stereocenter your heart could desire.  Much can be accomplished if you are willing to go through the steps.

When it came time to create the intro slide I found it difficult to track down the first use of the term “semisynthesis.”  On top of that, any reasonable definition that I could find didn’t reflect the current use of the word in the literature.  Not to point the finger (since we are as guilty as anyone), but if the starting material is from the chiral pool, how can you call it a total synthesis?  Why the difference in the literature?  It seems that the word “semi-synthesis” has a negative connotation, is a dirty word, as if the authors took a shortcut or easy route.   But what if only one of ten stereocenters in a natural product is derived from the chiral pool?  Would we label this feat with such a disgraced title?  Where do we draw the line between semi and total?


This is where my presentation took a turn (maybe for the worse).  Since no adequate metric for comparison of semisyntheses existed, one needed to be created.  One must be created! (a little heavy on the sarcasm)  To keep it simple, I assumed the two variables consistent with all semi-syntheses were the incorporation of mass and complexity from the chiral pool.  Simple addition of these two variables would arrive at a given value, which I deemed naturality, or N.  The mass variable, M, consists of a percentage of mass retained from the starting material (m1) in relation to the mass of the target (m2).  The complexity variable, C, is a percentage of stereocenters remaining from the starting material (s1) over the total stereocenters in the target (s2).  After multiplying each term by 50 and adding them together, the resulting scale would range from 0-100.   A total synthesis would always give a value of 0, and the value would go up from there.  Unfortunately, as a synthetic organic chemist, this nears the extent of my mathematical prowess.


As expected, a degradative synthesis of jorumycin gave a very high value of N = 95. 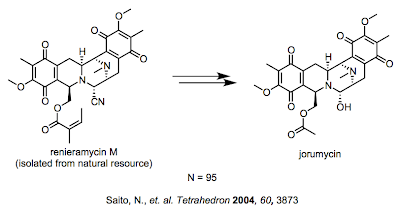 The smallest value I could find came from my previous lab, in which a single oxygen atom from lactic acid remains in rishirilide B, affording a value of N = 2. 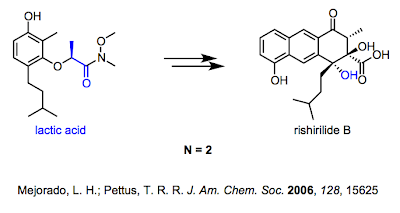 Next, I took various syntheses from the literature, assigned each a value, and put them in table.

Looking through the final table, we can see how they span the range from 5-95. Conclusions?  Anyone? Anything?  Would you use this approach to design a synthesis?  What would it be useful for?  My answers are no and I’ve yet to find one.  This could have been a waste of valuable time.  I may have created the first metric for comparison in which nothing useful can be derived from the results.  That may be a feat in itself.  The one realization that meandered out of this exercise would be that people misuse the term semisynthesis.  While this metric is most likely flawed, the one thing we might agree on is that if you can arrive at high value of naturality, you should hesitate to call it a total synthesis.  I’ll be first to admit that a simple label doesn’t encompass the innovation of a manuscript, and you shouldn’t get caught up in such trivial matters.  So maybe “semisynthesis” isn’t a foul word after all.  I could argue it is fitting for a number of total syntheses.  Or possibly, the term “total synthesis” is the one that is misunderstood or antiquated, as it seems to be a catch-all label for any synthesis of a natural product.