Aromatic C–H amination has received a lot of attention over the last few years, and our efforts began late 2012. The goal was simple: create a nitrogen-centered radical and trap it with a heterocycle.

What we did not realize at the outset was how different N-centered radicals were from carbon radicals. Our initial plan to prepare a zinc sulfinate salt that was able to do this failed due to instability of the sulfonyl chloride precursor. After significant experimentation, we finally found NSP reagent to be ideal for our target transformation. Ironically, this discovery was based on our preliminary work with the Minisci reaction performed using the acid version of our reagent on pyridines, considering his prediction that such amination reactions were destined to fail. 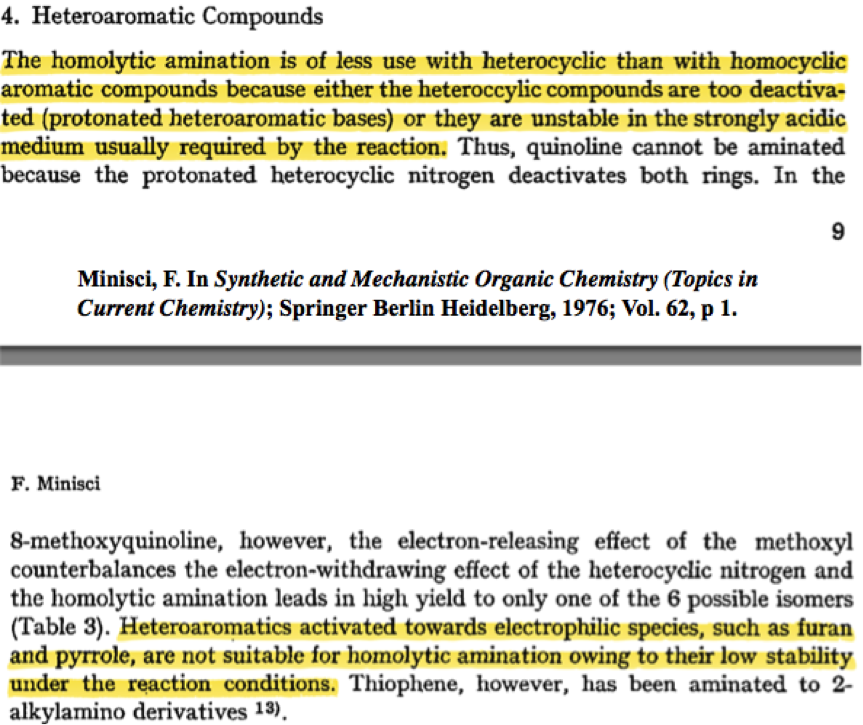 Instead of talking about our journey towards this reagent, I personally think the succinimidyl radical (S·) deserves a little bit more attention. Succinimidyl radicals are an elusive species, and for the longest time have been thought to exist in the Π electronic configuration due to the observation of species 1 in the Wohl–Ziegler bromination reaction. Two mechanisms supporting different radical chain carriers have been reported. While the Goldfinger mechanism (Br2 is the main radical chain carrier) has been widely accepted, it was later proven that Bloomfield’s mechanism where S· is the chain carrier would become the dominant pathway when either a different solvent or with substrates bearing less reactive hydrogens were used. Attempts to trap the S· were successful, and this radical is now proposed to exist in the ∑ configuration as well. This suggests that the S· is a very reactive but unselective species. Skell and coworkers successfully showed that C–H imidation of olefins or aromatic systems was possible with NBS by using an excess of sacrificial olefin (to trap the Br2) (see Chow et al., Can. J. Chem. 1979, 57, 1967; Skell et al., J. Am. Chem. Soc. 1978, 100, 1950).

Apart from the inability to characterize the S·, the unsually strong N–H bond strength (~110 kcalmol-1) of succinimide seems to suggest that this radical would undergo spontaneous H-abstraction. For the longest time, we were surprised that the S· would give us any product at all, instead of undergoing rapid H-abstraction. A report by Skell then shed some light on this intriguing species. This study uses glutarimidyl radical (G·) instead, as they are known to be more stable and do not undergo ring opening. Interestingly, H-abstraction selectivity of the G· did not parallel that of relative C–H bond strengths. In the study of halogenation of neo-pentane and dichloromethane, it was found that neo-pentane reacted more rapidly, even though the C–H bond was stronger.  This ‘disregard’ for bond strengths is also observed with Cl· and S·, which can be rationalized by an early transition state where the product stability is not a major significant factor. This is in stark contrast with a Br· where the ratio of hydrogen abstraction (neo-pentane/CH2Cl2) = 0.06, reflecting the effect of relative bond energies in a later transition state (see Lind et al., J. Phys.Chem. 1993, 97, 1610; Skell et al., J. Org. Chem. 1986, 51, 2071).

Having a greater appreciation for the S·, we are excited that this radical was able to add to a variety of different (hetero)aromatic systems. 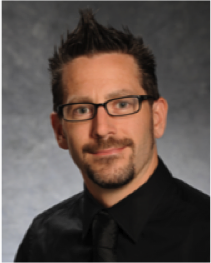 Lastly, we would like to thank our Bristol-Myers Squibb collaborators, in particular Dr. Martin D. Eastgate (left) for his incredible insight and valuable suggestions. Over the past year and a half, Martin has been communicating with us on a biweekly basis via teleconference regarding this project. As a graduate student in an academic environment, this was initially pretty stressful due to the need for periodic updates. However, it soon transformed into an exhilarating experience because it was as if I had two ‘bosses’, and their enthusiasm and drive definitely rubbed off on me. Martin’s undying optimism was an incredible asset, and we are happy to have him work with us on this very exciting project.