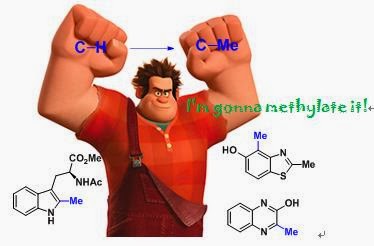 This week, the newest paper in our sulfinate chemistry series was published online, featuring a radical-based C–H methylation of heterocycles. Indeed, as we embarked on “mission methylation,” we were mesmerized by the “magic methyl effect” where appending a single methyl group in the appropriate place could improve the biological activities of pharmaceuticals as much as 100-fold. (See the elegant review by Tim Cernak: Angew.Chem. Int. Ed. 2013, 52, 12256; there are also two interesting blog entries “In the Pipeline” about the Magic Methyl Group in 2011 and 2013.


However, our interest in arene and heteroarene methylation dated way before the aforementioned disclosures, even before our first report of sulfinate chemistry. Our initial inspiration came from the classic Fenton chemistry (some 30 years ago), and our lab initially set out to generate methyl radicals from DMSO under oxidative conditions. Various other radical surrogates were surveyed, including the methylsulfinate salt. However, none of these endeavors were successful. Reactions proceeded with very low conversions, and reaction monitoring/product isolation was incredibly challenging since the product and starting material almost had identical polarity. 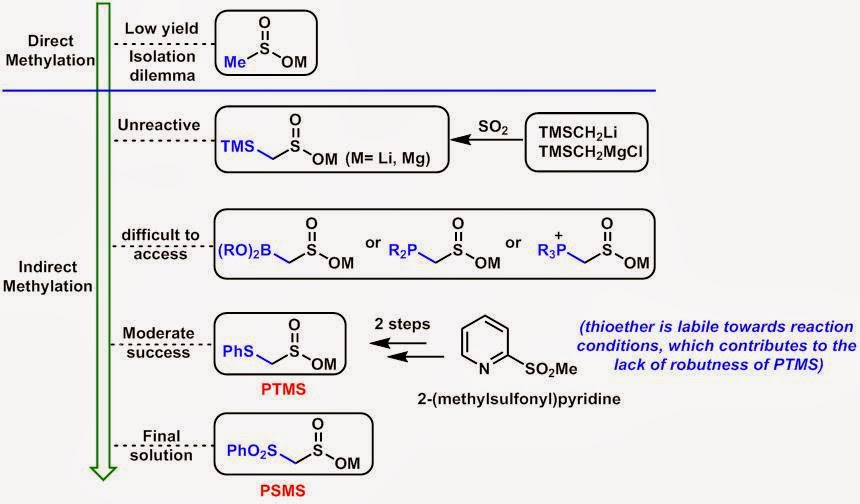 We then realized that an indirect methylation reagent would be perhaps more useful—we would incorporate substitutions to our radical precursor which could fine-tune radical reactivity and ease product purification. Thus, we synthesized the TMS sulfinate salt. To our dismay, this reagent exhibits poor reactivity, forcing us to consider other heteroatoms, including boron and phosphorus—however, sulfinate salts containing these elements were difficult to access and didn’t show satisfactory reactivity. Sulfur did us the magic! We successfully made the bench-stable (phenylthio)methanesulfinate (PTMS) and were elated to discover that the •CH2SPh radical adds to pyridines. Nevertheless, the thioether moiety was highly labile under reaction conditions, undermining the robustness of the reagent. However, upon changing the thioether to the corresponding sulfone, we finally identified a more robust and reactive reagent.

PSMS is not only robust, but the sulfone group also allows for easy separation of product from starting material as illustrated by the TLC plate below. While one can hardly differentiate N-Boc-tryptophan methyl ester (1) and its methylated analogue (3), the (phenylsulfonyl)methylated product (2) stood out distinctively. 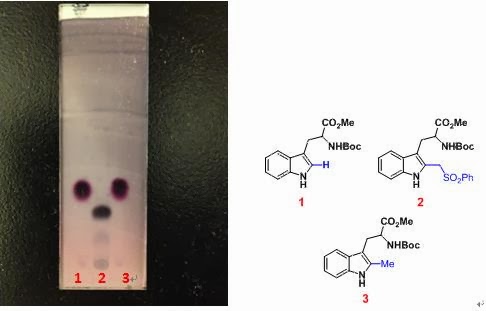 Admittedly, the preparation of the salt (PSMS) wasn’t anything trivial in the beginning: originally, we developed a four-step sequence (shown below) using benzothiazole as a leaving group during the reductive cleavage. We could only obtain ca. 8 g of PSMS over a period of one week; furthermore, the sequence included two chromatographical separations, which can be really tedious on large scales. But then the good news came: when we became concerned over the utility of the salt, Aaron from Pfizer came to the rescue as he suggested a one-step preparation of PSMS using DABSO (Org. Lett. 2014, 16, 150). Eddie (Chung-Mao) skillfully executed this idea and now we have a column-free procedure. This new procedure, which is described in the paper, could provide 25 grams of PSMS in two days (one chemist in a single batch); PSMS prepared in this manner is completely free from ZnBr2.

If anyone has questions about this methylation project, I'd be very happy to answer them!
Posted by Unknown at 10:33 PM